The Government of Vanuatu has agreed to ban a list of manufactured products made of plastic in Vanuatu, based on a research to reduce marine litter by the Commonwealth Litter Programme (CLiP).

The decision was announced by Vanuatu’s Minister of Foreign Affairs, International Cooperation and External Trade, Ralph Regenvanu during a South Pacific Regional Conference, which took place in Port Vila, on the 18-19th February.

Minister Regenvanu said there are certain steps to follow before the ban can come into effect on December 1 this year, “it must be first approved by the Council of Ministers, following a draft Legislation under the Waste Management Act so the ban can finally be implemented.”

Six items have been enlisted by the Minister to be prohibited following the original ban of the Waste Management Order No. 15 of 2018, which banned single use plastic bags, plastic straws and disposable containers last year. New additional items added to the list are:

2. Plastic packaging for fruits and vegetables

“To this point, after receiving feedbacks from the Department of Environment, with consultations from the Chamber of Commerce, the State Law Office and the Ministry of Foreign Affairs have settled to proceed in banning the given list,” said Minster Regenvanu.

So far, the debate waged on over the decision of banning diapers in Vanuatu. UK Government’s Centre for Environment, Fisheries and Aquaculture Science (Cefas) Principal Investor, Thomas Maes, has assured there are better alternatives for disposal diapers which are eco-friendly, reusable and affordable at the same time.

Unlike the usual plastic used diapers we see in shops, they share a similar resemblance to a recyclable cloth diaper or cloth nappy which gives a head start in tackling and reducing litter problems in Vanuatu.

“The implementation must always go back to the village level, to have ownership and to partake in activities that will one day benefit our future generations,” said chief Sope.

Chief Timothy Andrew commented that it is always wise to work with other countries in safeguarding our ocean, “so we can build relationships with other countries both regional and abroad in the future to ensure the decisions we implement today will benefit our children tomorrow.”

Mr Maes concluded that Vanuatu is the first country in the Pacific to ban manufactured plastic products under the Vanuatu Marine Litter Plan (2025).

“Solomon Islands and Vanuatu must become advocates for other regional countries,” he said

“We all share the same ocean therefore we need to work together, hand in hand, to protect, safeguard and preserve our ocean from marine litter.” 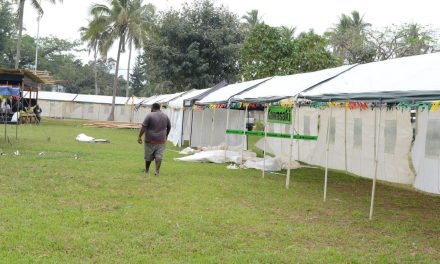