In a ground breaking development for Vanuatu, Elie Enock has been pre-selected on merit in two sports disciplines – F57 Seated Shot put and Women’s Heavyweight 60kg plus Powerlifting for the 2022 Commonwealth Games.

This will see Elie joining Team Vanuatu in two totally different sports disciplines at the Commonwealth Games in England from July 28 to August 8.“I am just so excited and proud on hearing this news,” Elie commented from quarantine at Tamanu Resort where she and Team Manager Asha Boehula and the other 5 parathletes are staying. “The pre-Commonwealth Games GAPS Camp really improved my performances a lot in Shot Put, javelin and Powerlifting. We had international coaches many of whom are former Olympians and Paralympians themselves who gave us good advice on technique and training programs.

“It’s so wonderful to be home here in Vanuatu. Now I must focus, keep training and get ready for the Commonwealth Games. I want to make Vanuatu proud!” This is an amazing outcome, not just for Elie personally or for Team Vanuatu but for all of those people sitting at home following an amputation due to an accident –like Elie – or from who can be inspired by Elie’s example. Please think about Elie’s story and the impact on her life of getting involved in sport.

“She became involved in disability advocacy with regional disability initiatives and is President of Vanuatu Disability Alliance.

She now has an exciting career at Vanuatu Agencies with her boss Tony Ryan encouraging her to study for Customs Clearance qualifications,” explains Margaret Macfarlane, President of the Vanuatu Paralympic Committee (VPC).

“VPC strongly support the sports pathways of our parathletes progressing into career pathways. So come forward, contact Vanuatu Paralympic Committee so that we can support their participation in sport for a better lifestyle.”

It’s not the end of the story for VPCs parathletes as they are waiting for news by the end of this week if any of the other parathletes who attended the GSPS Camp in Birmingham UK will also be offered a slot in the Commonwealth Games and Team Vanuatu.

The Vanuatu Para-athletics Team left seven days quarantine at Tamanu on Monday with Training Programs to be followed at home and at Korman to keep the whole team competition ready. 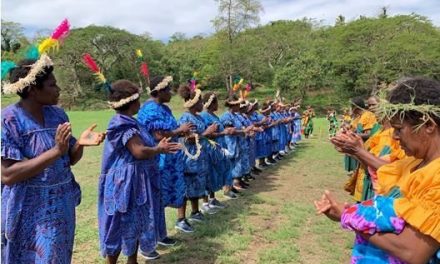