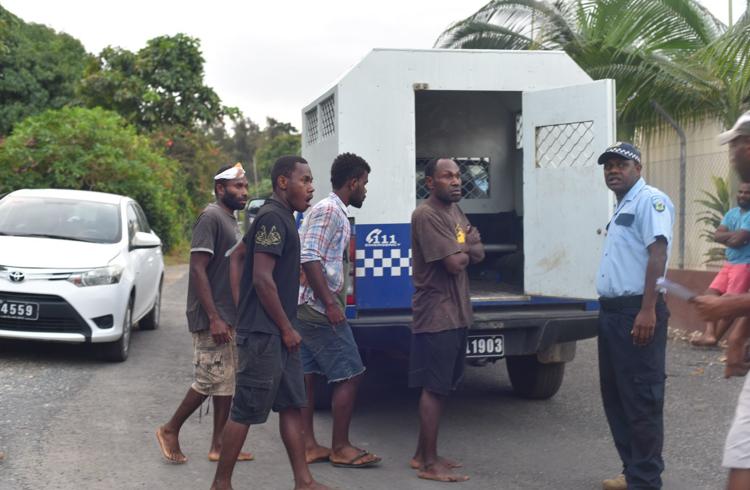 Five men from Erromango have been remanded in the high risk facility yesterday after claims alleging that they attacked, a man, his wife, son and daughter with knives and steel rods over land at William’s Bay (Dillon’s Bay).

The family is receiving medical treatment at the Vila Central Hospital with the father fighting for his life.

Reports received by Daily Post confirm that the injured father was still unconscious as of 6pm yesterday through the wounds he sustained during the attack.

The mother, daughter and son’s condition have been stabilized.

Police confirmed the men were remanded on charges of intentional assault, threats to kill and unlawful assembly.

Police said that a joint operation of police officers in Port Vila and Tanna were deployed to the scene to secure the area and have peace restored among the family and the community.

After the arrest, four officers are still on the ground to finalize the investigation pending the court hearing.

Police is calling on the people of Erromango, especially at William’s Bay to remain calm and help the police with their investigations and let the law take its course.

The fight erupted after a longstanding land dispute between a family from same clan at William’s Bay.

Reports confirmed that the dispute is in the courts hands and is supposed to be dealt with in the next Tafea court circuit on the island but amid much pressure the men attacked the family.

Daily Post was told that on Wednesday this week (August 14) the fight broke out in the morning near the primary school in the area and disrupted the classes as well as the village’s daily activities.

An aircraft was then chartered to have the injured family medivacked off the island after being examined by the local nurse.

It was alleged that the defendants used knives and steel rods to assault the victims.

Reports say Chief Jason Mete had requested police to intervene and put a halt to this continuous practice between the same clan.

“When there are family fights, it brings panic to children, women and young girls,” a source from Erromango said.

Tafea Outer Island MP Tomker Netvunei said that he has been requesting a police post to be located on the island without success.

Mr Netvunei said that the number of people on the island is increasing an outnumber the chiefs and the leaders in the community.

He said that the presence of a police officer would deter people from committing offences and he believes that a police post in Dillon’s Bay would help.