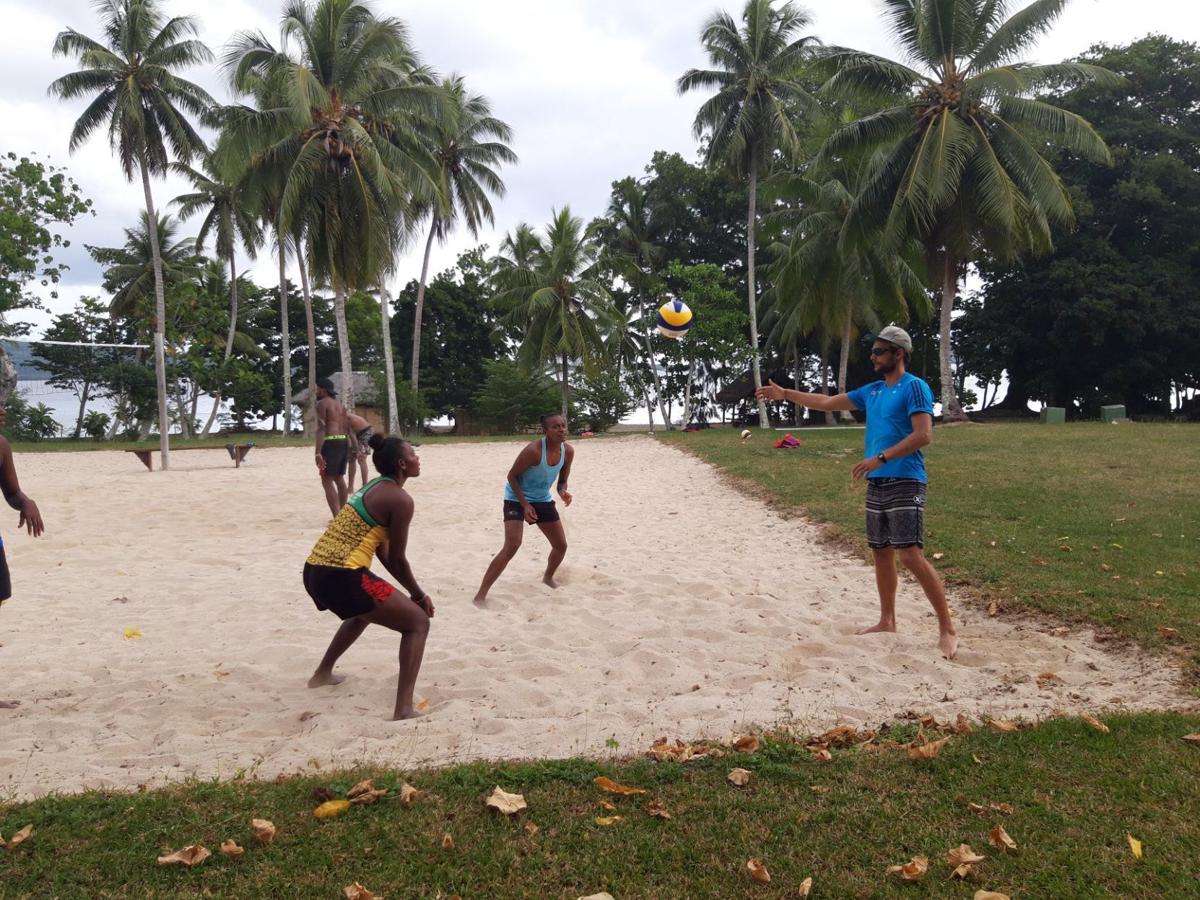 At just 21 years of age, Sherysyn Toko is already making her mark on the international beach volleyball stage.

Representing Vanuatu since the age of 18, she has been partnering with veteran player and mentor Miller Pata for the past nine months. Tinny – as she is affectionately known – has competed across Asia and Australia this year, finishing in the top five in four out of last six FIVB tournaments, one of which saw the pair win a silver medal in Satun, Thailand.

Toko, who comes from Ambae, one of the northern islands of Vanuatu, initially played indoor volleyball but then moved on to join beach volleyball when close family friend and qualified Oceania volleyball referee Serah Toto took her to the courts at Stade and introduced her to the sport she now calls her own.

“I think for me it’s hard playing Indoor with that many players, but the more you train and get use to co-operating with players in either Beach or Indoor, you can cope with each of your matches,” she said.

While on Ambae they only play Indoor volleyball according to Toko, her community has come to know about beach as a new sport, through her involvement.

“My families and the people living in my islands are very happy and proud to see that I am playing beach volleyball and not only representing Vanuatu, but also my province which has been recently affected by volcano eruptions resulting in my people being removed to other nearby islands,” she said.

“On the island, there is a place or an area where we can go and play volleyball. We usually play every afternoon just for fun and sometimes we train when we are competing in activities or in bigger celebrations held in the country, especially when we train to play during the celebration of Independence each 30th of July.”

Toko’s preparation towards next month’s Pacific Games in Samoa has mainly been through her 2019 FIVB World Tour event participation competing in Cambodia, India, Australia, Thailand, Vietnam and China with a stop at the recent Arafura Games in Darwin.

There, the Vanuatu women put on a show as Toko won the silver medal with young developing player Maybel Ravo against the veteran pairing of Henriette Iatika and her usual partner Miller Pata.

“On returning to Port Vila, we continue our training and also attend gym sessions, training everyday under the supervision of our FIVB-funded coach Michel Bargmann from Germany,” said Toko.

“It is my first time competing in the Pacific Games because I have not yet participated in either the Mini Games or the Pacific Games, so this one (in Samoa) will be my first and I am very glad to be able to play and represent my country. “

Toko admits that while every participating Pacific team is also training towards the games aiming to achieve the best, she is very confident of bringing home a Gold Medal.

In addition to all her training, Toko is a student at the University of Emalus Campus in Port Vila, where she is studying physics and geography, hoping to become an engineer.

“I spend any free time with my friends, but most of the time I just stay at home helping my family do chores around the house,” she said.

“Then after all of that work is done, I can relax and watch a movie with my family and friends.”

Toko’s parents, family and friends are her biggest fans, supporting her through each of her tournaments and when she travels out of the country for the FIVB World tour. But she names her grandmother, who she is very close to, as her number one supporter and who continues to encourage and pray for her whenever she’s playing.

“The person I look up to as a role model is Miller Pata, my partner, because she is a very experienced and I am so glad to play and train alongside her so that I too can learn more from her.”

Toko is keen to encourage all junior beach volleyball players and other athletes to be positive and never think they cannot do it – just commit to the training and work hard.

“You don’t have to think low of yourselves, just start thinking of how you can overcome the challenges and make a difference in achieving your goal.”

Vanuatu’s Queen of the Court Ready for Samoa 2019

Loaded with experience at the elite level, Vanuatu’s number one beach volleyball player Miller Pata, will lead the VVF team when it competes next month at the 2019 Pacific Games in Samoa.

31-year-old Pata, who grew up on Banks Island in Torba Province, remembers when it all began for her.

“I started playing beach volleyball in 2006 at the Penama Games in Ambae and won a silver medal,” she said.

“At that time, I played with Lesline who was my first partner when I started playing volleyball.”

Pata remembers when they returned to Banks Island from that competition, receiving a letter inviting them to another competition – this one in the capital, Port Vila. The pair played against other provincial teams in the tournament and won Gold.

“From that we got lucky and got selected from those ten teams to train and play in the Oceania Championships in Samoa in 2007,” said Pata.

“To tell you the truth when I was a child growing up in my community, I used to play a lot of Indoor volleyball matches, until in 2006 when I started to play beach volleyball.”

“I like playing beach because there are only two players on the court, so I can communicate with my partner. Whereas in indoor volleyball, there are six players in a team and communicating with them is quite complicated because everyone wants to be the boss on the court,” she said.

Pata now lives in Port Vila with husband Tom, who’s from Tanna, and their two children Jennifer and Tommy.

The strong support she gets from Tom and their kids for her beach volleyball career also extends to her parents, who despite being back on their home island, continue to support her at all times.

In preparation for the Samoa 2019 Pacific Games, Pata has, in recent months, won gold at the Arafura Games in Australia, as well as competing in a number of FIVB World Tour and Asian Volleyball Confederation events travelling to places such as Thailand, Vietnam, Cambodia, China and India, with new young partner Sherysyn Toko.

But it’s not all just about time on the court.

“Aside from gaining experience competing against other international players, back in Port Vila I also do training in the gym and also with our FIVB-funded coach Michel Bargmann from Germany.”

Pata is expecting some tough matches in Apia, especially as Australia and New Zealand are competing in Beach Volleyball for the first at the Pacific Games level.

“To be honest, with New Zealand and Australia also participating in this upcoming event, it will make our game more interesting and stronger,” she said.

“I think it is a good thing that we play against other Pacific countries so that all countries learn from each other which will benefit them in their further training,” she said.

This will be Pata’s third Pacific Games, having previously competed in Samoa in 2008 and New Caledonia in 2011.

“My goal for the Games is to win Gold for my country and then my future goal when I come back is to train hard to be able to qualify for the Tokyo 2020 Olympics.”

Pata admits that besides travelling to compete in AVC or FIVB World tour events and training back home, she likes to spend time with her children and family. She enjoys cooking, cleaning around the house and just being at home.

“Even though I face plenty of challenges, I am grateful to have a wonderful role model in life that I look up to in my husband, who always encourages and supports me throughout my involvement in continuing to play beach volleyball and, even though we sometimes argue, he has never stopped me from continuing to train and play,” she said.

“He is not the only person I look up to, along with Vanuatu Volleyball Federation (VVF) President Debbie Masauvakalo, for always encouraging and having confidence in me and supporting me every step of the way in achieving at each world tournament.”

“I want to encourage all the athletes that no matter that the training is hard, you have to keep on training so that you can reach the any level you would like to reach, so I am encouraging all of you athletes to train more,” said Pata. 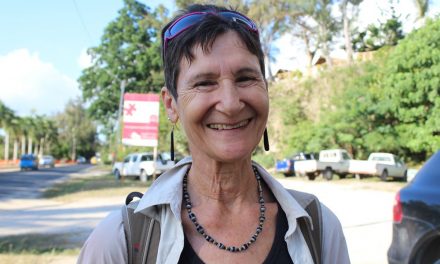 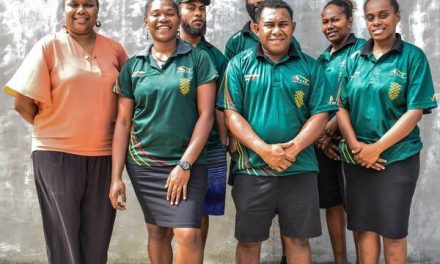