Surfing in Vanuatu is not just about the sport, but a means to empower youth, strengthen community, and create opportunities for the future. From its humble beginnings, the VSA has come a long way, improving many lives on its path.

This article was originally published in Island Life magazine. 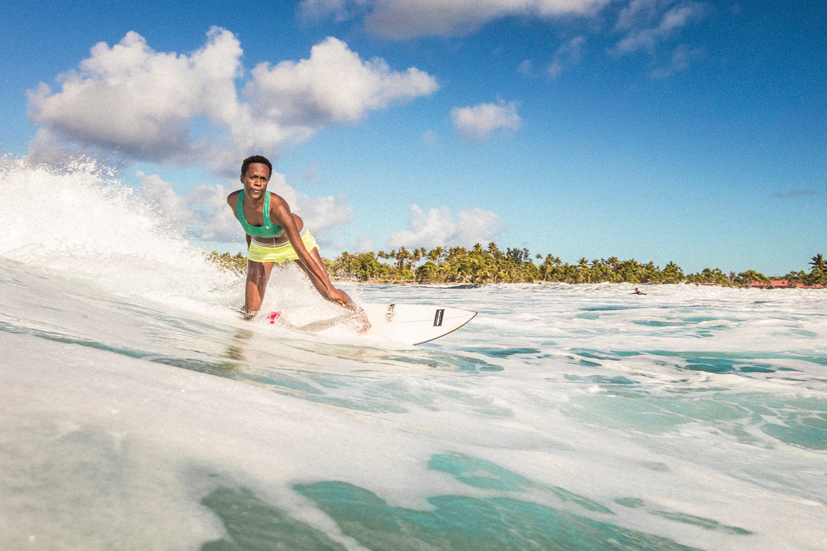 The first time Ben Johnson started surfing at Pango was when he was six years old. Back in the 80s the founding president of the Vanuatu Surfing Association (VSA) would follow his two older brothers into the waters of Pango, an ideal surfing spot that only a handful of expatriates knew about. Today the secret is out – Pango has become known as the iconic surfing location of Vanuatu and is the breeding ground for the nation’s best surfers.

The VSA was officially established not long after Ben discovered that surfing was a sport in the Pacific Games (formerly known as the South Pacific Games). Recognizing the potential of local Ni-Vanuatu surfers, he started to do the groundwork to get a team together to represent Vanuatu for the next Games. 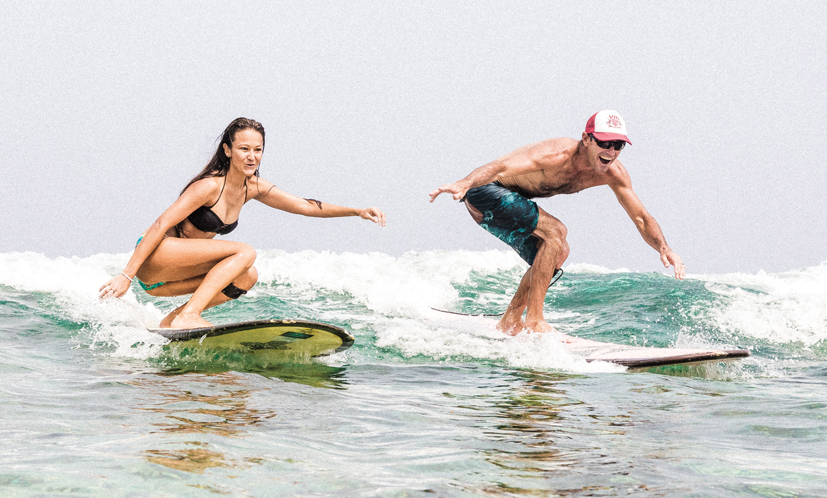 ‘After trying to organize a team, I came across all these hurdles and realized I could not do it by myself,’ says Ben.‘I floated the idea among my good friends, who were also long-term expat residents, and in 2009 the Vanuatu Surfing Association was established. We did that in order to qualify for the 2011 Pacific Games in New Caledonia, which we did.’

Since the VSA’s conception, Vanuatu has won four Melanesian Cups, a regional surfing competition, and at the recent 2016 Fiji Powerade Junior Pro, three of its members came in second place in three different divisions. 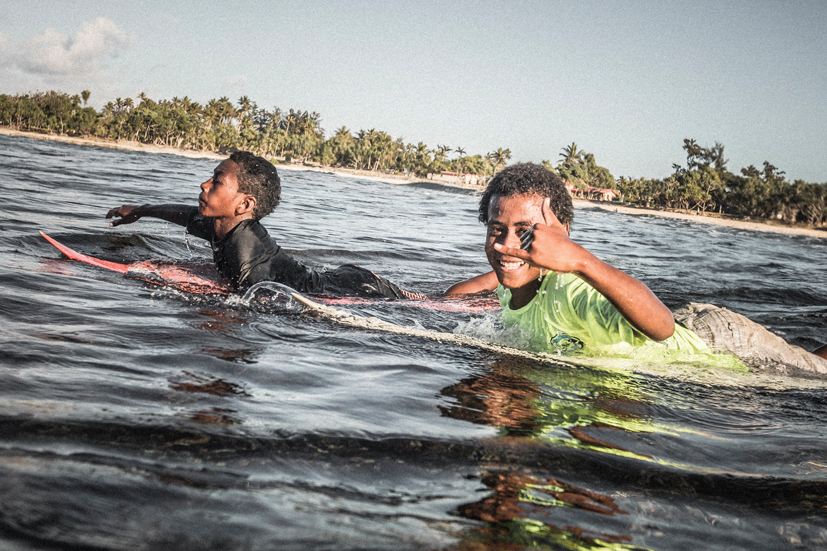 ‘Considering we didn’t have a strategic plan and that it was put together by an old crew of mates, I really didn’t expect the VSA to grow this fast and become this strong. Our initial target was just the Pacific Games. Now the goal is to bring a team to the 2020 and 2024 Olympics,’ says Ben, who is currently the VSA Head Coach and Vice-President.

Although the ultimate goal is for Vanuatu to be in the 2020 Olympics, where surfing will be finally introduced into the sporting structure, one of the VSA founding members, Simon Pettiford, says the motivation is not for fame or glory but for the love of it.

Simon says that unlike other countries that offer big prize money in competitions to motivate surfers, Vanuatu surfers do it because they love it. “Surfing is a personal thing. Everyone’s style is different but it builds some great skills that you can apply to the rest of your life. Surfing is 90% paddling and waiting. You paddle the majority of the time to be able to catch a wave. No one is going to pull you along; it trains you to work for something and how to be patient. When the wave comes, you need to think quickly about how you will ride it, and have the courage to take the drop.” 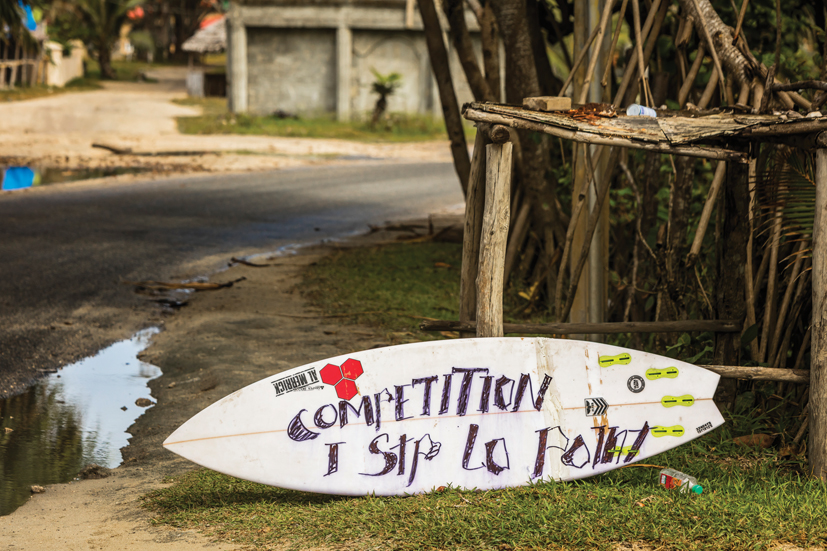 It is easy to see how the techniques of surfing can be applied to fostering life skills – from patience, quick decision-making, building self-trust and discipline. Yet as recently as 2011, the stigma surrounding surfing was so high that the chief police of the village would actually cane the youth of Pango for participating in the sport.

“The kids weren’t even allowed to surf on the weekends,” says Ben. “The chief would be down at the beach with a stick waiting for anyone to dare get into the water. It was only after we came back with our first Melanesian gold Cup in 2012 that we managed to break the stigma. They realized that the kids were achieving something. Now it’s all sweet – the kids can surf on the weekends as long as they go to church and do their chores.”

Short in resources but big in ingenuity.

Risu Kalotiti, the media director of the VSA, grew up in Pango village and says she was inspired to try surfing after constantly seeing people catching waves outside her doorstep. ‘I started when I was six years old,’ says Risu, 23. ‘I would surf on my mum’s old washing wooden plank that she would use for the laundry!’

Like many of the young kids at Pango, Risu didn’t have her own surfboard. Prior to receiving dozens of donated surfboards through the VSA, the local community would make use of snapped boards, broken pieces of wood, foam blocks and old canoes to catch a wave. 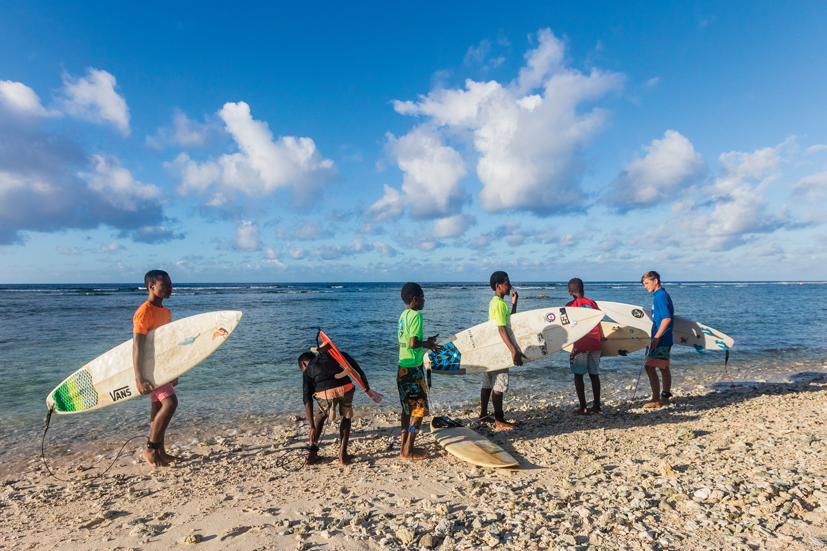 In fact, it was only this year that Risu received her first surfboard. “After 17 years, I finally got my first surfboard. It was custom made by Pieter Stockert after I’d gone to the Gold Coast in Australia to attend the Juraki Pacific Teams Challenge with the VSA.”

Pieter is one of many who have generously given his time to develop the skills of Ni-Vanuatu surfers. Under his mentorship, Risu’s sister, Resmah Kalotiti, learnt the art of surfboard shaping over the course of five days when the Juraki Challenge ended. “I was working 8 hours a day and on the last day I worked through the night before catching my flight home. It was serious manpower – my arms were so sore!” says Resmah.

Resmah, 20, is the first woman in Vanuatu to shape surfboards. She says that her ultimate dream is to be able to apply the skills she learnt from Pieter back home. The materials that Resmah needs to start her surfboard shaping business have been generously donated by Pieter and the surf club in Australia; it is only a matter of having it all shipped over. “I am inspired by Pieter and so humbled by everyone’s generosity,” says Resmah. “Our level of surfing in Vanuatu is very low compared to Australia and it means so much to me that they try to help us reach an international level.”

As Vanuatu’s number one female surfer, Resmah says all the younger girls have been fighting to use one of the three surfboards she has made. “Whoever comes first, gets to use it,” Resmah says. “I’m very proud of my finished boards. When I saw what I had achieved, it felt even better than catching a wave!” 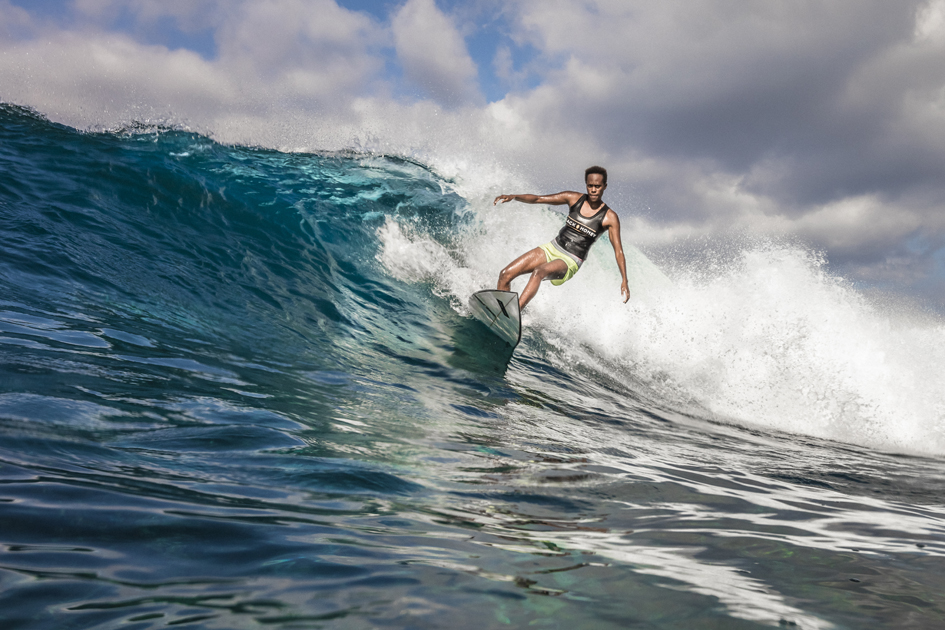 Empowering the community to create micro-businesses around surfing

It is not just Resmah whose skills have expanded because of opportunities arising from the VSA. John Stevens, a 24-year-old surfer from Pango, is a surf coach and contest director at the VSA. Although he has been surfing for 14 years, he only started taking surfing seriously after travelling to Fiji for a surf competition.

“I was unable to finish school because my family couldn’t afford to pay the school fees,” says John.“I was drinking, hanging out with a bad crowd and doing silly things like throwing rocks at cars. When the VSA nominated me to go to Fiji for two weeks, it changed my whole life. When I came back to Vanuatu, I made a commitment to surfing.” 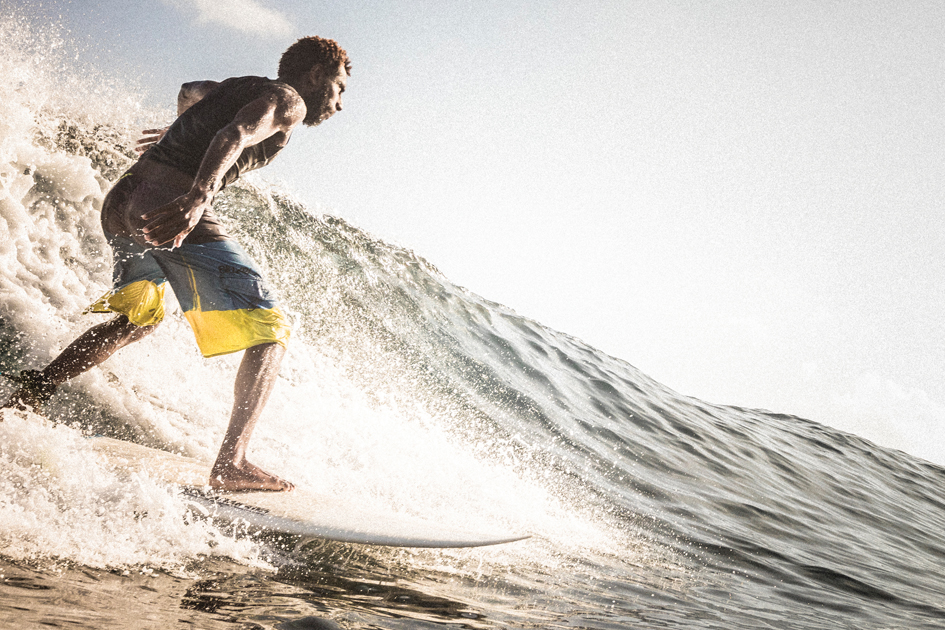 John now trains five or six people every week and has a range of donated boards to suit every skill level. His friend from Australia helped him establish a website that promotes John’s services including outer village surf tours.

It is through the generosity of the community, whether it is by donating boards, fundraising efforts or skill developing, that the VSA has been so successful. Stephanie Mahuk, the current President of the VSA, admits that the organization’s biggest challenge is funding. “We rely heavily on fundraising efforts and our business houses and supporters for donations and sponsorships,” Stephanie says. “We are currently working on setting up a sustainable business model that should be established by March 2017.”

Until then, the VSA continues to rely on the community for support. Sam Suendermann, VSA’s volunteer women’s surf development officer from Angelsea, Victoria, says that it is inspiring to see how the VSA overcome these issues but when problems do arise, it is often gender related. 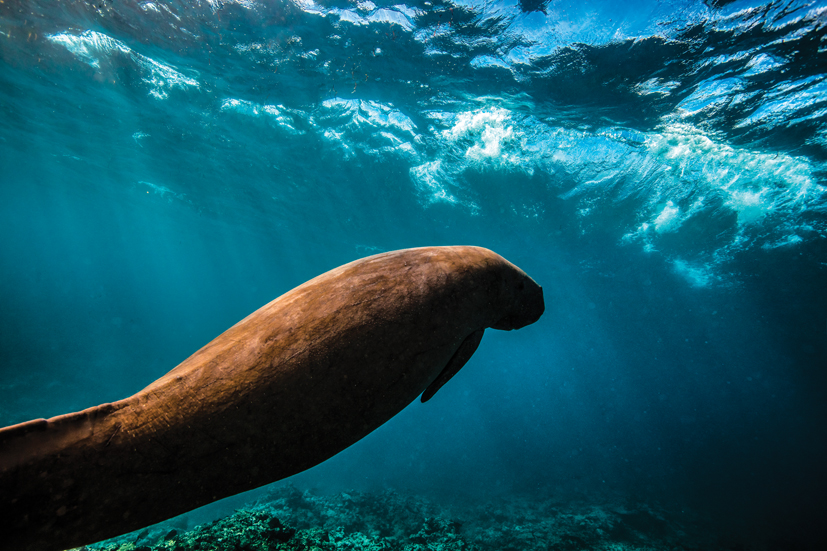 “The boys would grab their surfboards from the male volunteer’s house but the girls felt shy to go there,” says Sam.“Resmah and Risu decided to create a safe space for girls by using their house to store boards. It would be ideal if there was a surf club that everyone could equally access. Without one, we have to also facilitate our workshops and meetings in the private homes of VSA members.”

Sam is in charge of SolwataSista, the VSA’s women’s development program, which was established in July 2016. When Sam visited Vanuatu last year and organized ‘Dei BlongOl Gels’ with Risu, the event successfully drew in 25 girls on the first day and 50 girls on the second day and included surfing lessons, yoga classes and cleaning up the beach. 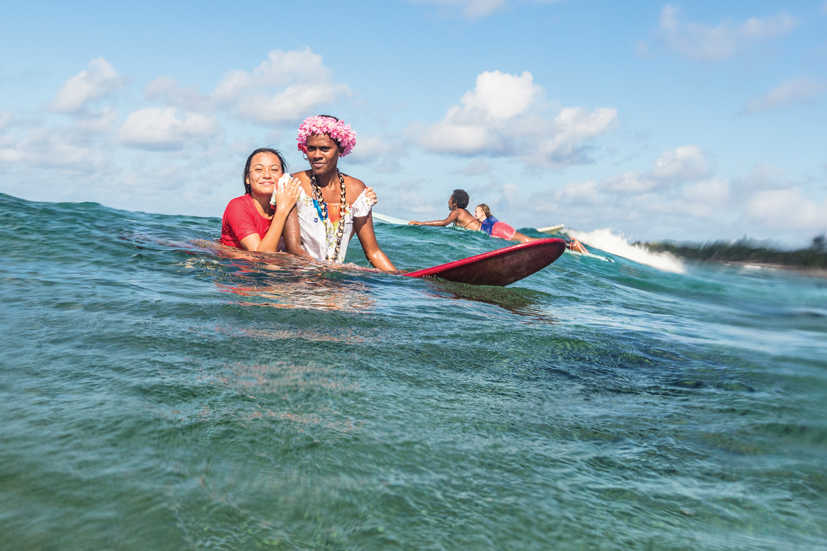 “I think that event set the momentum for women’s surfing,” says Sam. “At the Leimalo Classic event this year, we had more than sixty girls turn up! That’s a big number, even by Australian standards. We don’t just encourage girls to surf – we use it as an opportunity to engage with educational training and skill development.”

Through SolwataSista, surfing is used as a conduit to provide activities and workshops including first aid and beach safety, judge training courses, vision sessions (goal setting and leadership skill development), photography, art and storytelling workshops.Recently,a group of girls from their workshop got their artwork submitted into an exhibition called ‘SikPlastik Lo Solwota’, which raises awareness about pollution in the ocean.

As well as raising awareness about environmental issues such as coastal preservation, the impacts of littering, turtle and dugong protection, climate change and coral reef restoration, SolwataSista also breaches sensitive social issues such as domestic violence.

As the VSA’s first female president, Stephanie says that the work they do in the community brings her greater joy than the VSA’s impressive international competition results. “In my opinion, the VSA’s biggest achievement is the collective credit of all the little things we do in the communities that have effected positive change, whether it is raising individual awareness about environmental issues or the success of a surfing micro-business.”

Resmah Kalotiti can attest to the invaluable support of the VSA. She says that her childhood dream was to have her own surfboard and to travel overseas. Through the VSA, Resmah has competed in overseas surf competitions and says that her outlook on life has changed from the experience. 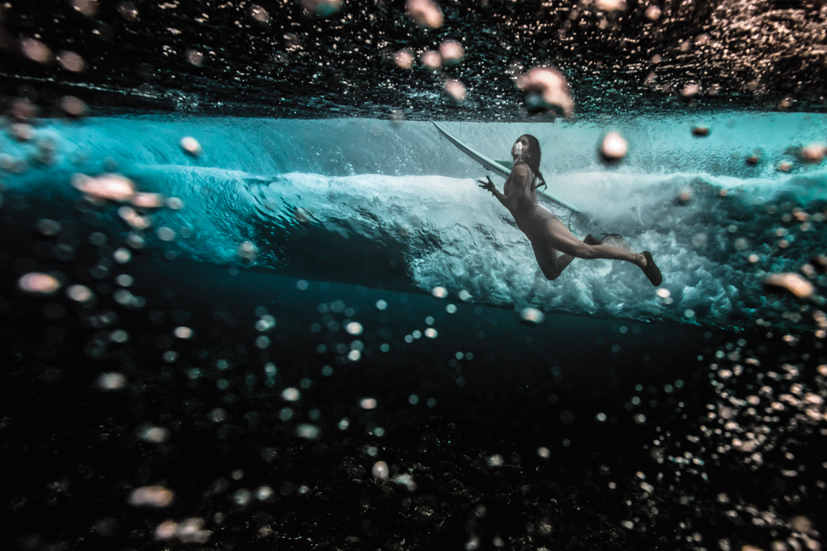 “When I was in the competition, I really doubted myself because I am used to reef breaks, not ocean breaks, and the other surfers’ skills were higher than mine. I spoke to the other surfers afterwards and I found out that they didn’t even know where Vanuatu was.”

“It really put things in perspective for me. I realized I am not just representing me, or my village – I am representing my country and this is the first time a Ni-Vanuatu girl is riding these waves!I stopped doubting myself, listened to their advice and tried really hard to surf well.”

Now Resmah has not only achieved her dream of travelling overseas and owning her own surfboard – through the VSA, Resmah can make surfboards for others too. 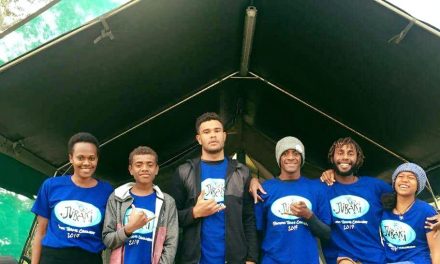 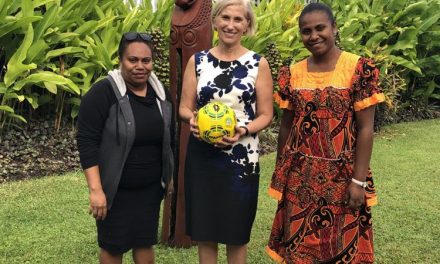 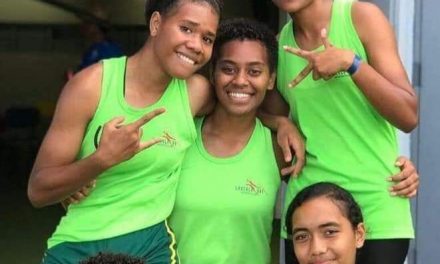 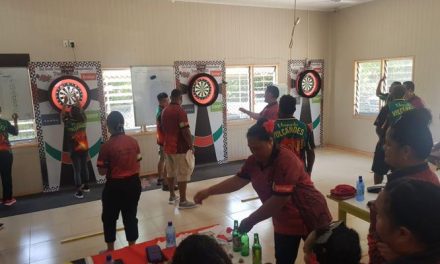