A man from Paama, Sahe Molu, who murdered his wife, Jelinda Arukesa, in July this year has been sent to prison for 11 years and six months.

Molu was sentenced last week after pleading guilty to a charge of intentional homicide (not pre-meditated).

He caused his partner’s death by hitting her on the head with a piece of wood several times, following an argument over alleged infidelities.

The deceased was found near the beach at Palekula in Santo.

On examination, the body was found to have numerous head wounds. An autopsy revealed the cause of the death to be traumatic head injury with compound skull fractures cause by blunt force trauma.

The maximum sentence for this offending is 20 years imprisonment.

There are no mitigating factors in the offending. Aggravating factors include the unprovoked nature of attack, breach of trust, taking advantage of an intoxicated victim, use of a weapon to the most vulnerable part of the human anatomy and abandoning of the deceased’s body in a remote area

“Mr. Molu pleaded guilty at the first available opportunity,” Judge Wiltens stated. “That indicates an acceptance of wrong-doing and remorse.

“However, the evidence suggests he had little option but to plead guilty as there was no one else with any motivation to act in this way, and there were numerous links to the offending indicating that he was responsible for it….

“Molu is 34-years-old, a taxi driver. He was married to the deceased and they have three school-aged children, 12, 9 and 7. They will now have to cope without their mother for the rest of their lives and without Mr. Molu while he is incarcerated.

“Molu has a previous conviction for possession of cannabis in 2014, I ignore this as an aggravating factor.

“He is remorseful. He described the deceased as the love of his life. However, that does not sit well with leaving her body abandoned in the bushes on the beach.”

Judge Wiltens said the sentence cannot be suspended for such serious matter.

The sentence starting point is backdated to commence from July 27 this year.

Molu has been given 14 days to appeal. 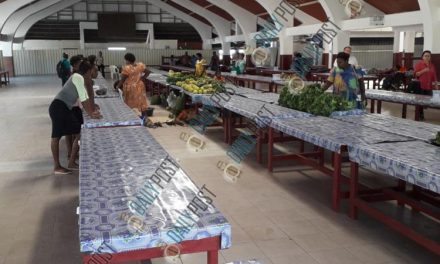