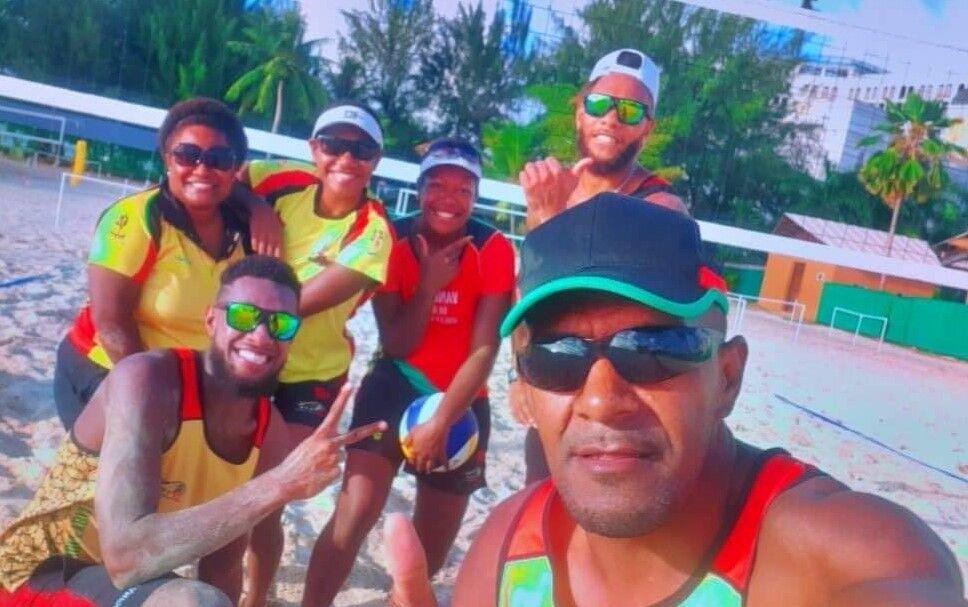 “Both our Female and Male Beach Volleyball Teams had aimed for ‘Gold’ when we arrived in Saipan in the Northern Marianas in Micronesia for the Mini Pacific Games last month.

“However only the Men’s Team achieved its dream and became like super stars among the local population because we beat the team of the host country and won Gold.

“Our Female Team won second place and accepted ‘Silver” after we lost to Tahiti. One of our players cried”.

The Manager said in an interview that in her opinion, both teams could have won Gold but as in all sports one team must lose and the ladies team lost to Tahiti.

This is confirmed by their Team Manager Pelagie Maho. Looking back at their twin achievements, the Teams’ Manager can only smile with satisfaction saying she knew they would succeed “because we nurtured all four players of our two teams for their games.

“To begin with, the two female players, Loti Joe and Marjabelle Lawac had left earlier to camp in Australia in preparation for their game in Saipan then flew across to meet us in Micronesia.

“I travelled to Saipan with our male team comprised of Stefano Banga and James Chilia and their Coach Marlon Poilapa”.

Asked what she thinks drove them to victory, she replied, “In order to prepare for our trip, we had to camp to prepare them, to equip them to meet their opponents without fear but confidence and focus in all their games on the beach to achieve victory.

“In my role at their Manager, I had to take their mobile phones from them to not be distracted. I was always there in all their games to cheer them towards their one goal which was victory.

“But of course, mentally I was very nervous but I made sure it was not obvious”.

With her constant smile she says the good thing about her players was that they were all obedient and respected her authority one hundred percent.

Daily worship was an integral part of their group and she recalls, “I remember clearly that during one of our worship seasons, I said something about “if they should win Gold”, and one of the two male players interrupted me by saying, “Don’t say ‘if’ we are going to win Gold because we are already focusing on taking Gold”.

“Oh, so your mind is already set for Gold?”, she asked.

“Of course we are going for Gold”, he replied.

Their Manager congratulated the Male Team saying they set a new record for Vanuatu by winning Gold because it was the first time for the Vanuatu Beach Volleyball Male Team to win Gold. As Manager, she says she calmed her player who cried and assured her that her team succeeded in winning Silver so her team did not lose. She wiped her tears.

Asked what message she would have for future teams if she should be chosen to manage them in their games, she replies, “The keys are humility and obedience to all the rules that we sign to see us throughout our trips from the beginning to the end”. Merick sisters firm on a mission