In a blink of an eye, half the year has gone! We have done so much already and continue to do more. The highlights for this month was most definitely our campaign to raise awareness on sexual harassment, our projects team were hard at work organizing and carrying out the activities for an online campaign implemented on our Social media platforms. We also continued to produce and release the last pilot episodes of our podcast – The Round Table. We hope to be as productive in the last half of this year as we were in the first half, but with more ease and grace.

In June we celebrated Miss Havana 2021! 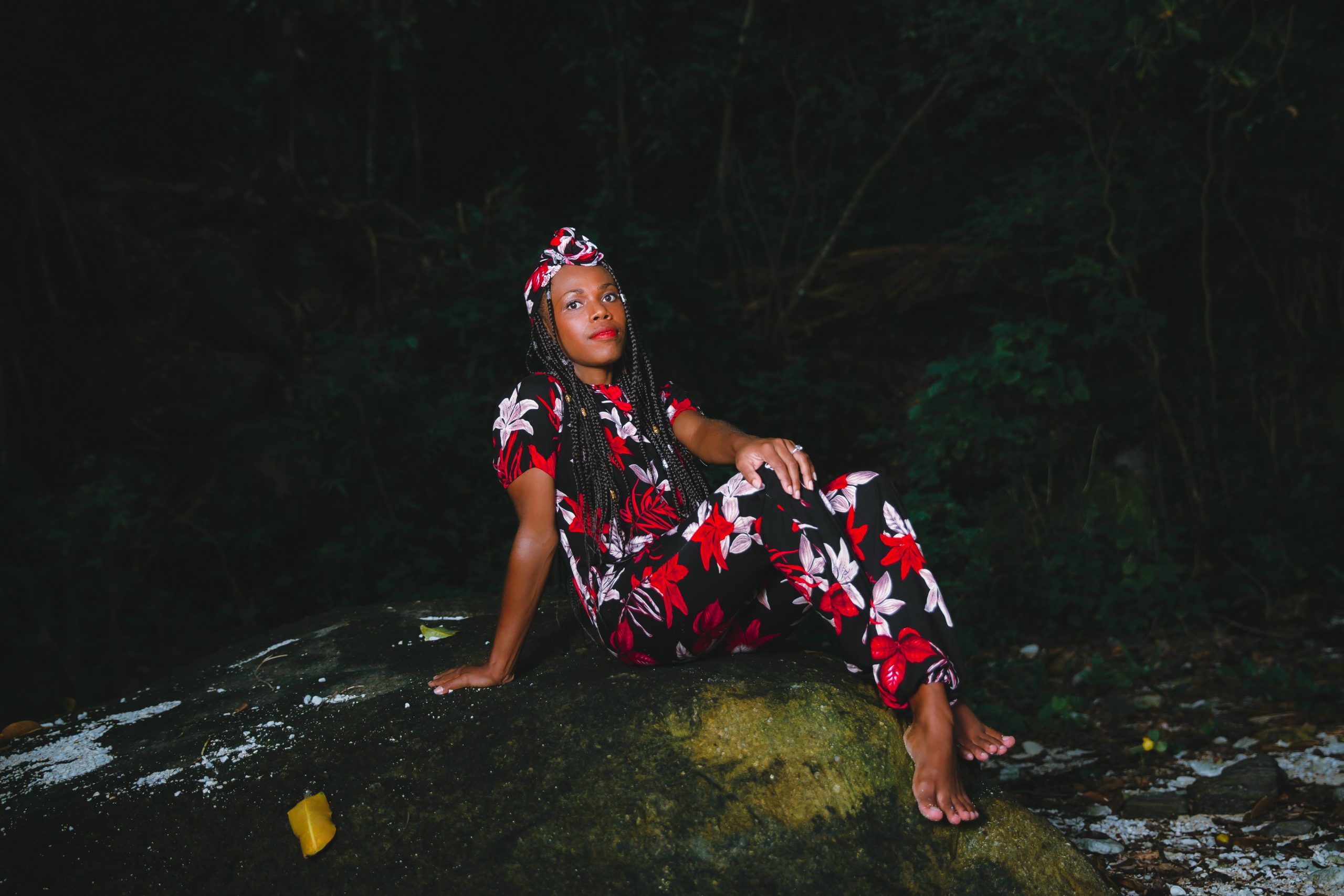 Gislain Billy is a fashionista in her own right, Gislain is a young woman hailing from Lelepa island and dreams of one day opening up her own fashion boutique. Gislain modeled her own clothes that she designed and tailored on her home island.

Empowered by the classes she has taken at Wan Smol Bag including sewing, singing, guitar and drumming, Gislain is fearless in her journey to unlock her creative potential and lives by the quote “Learn from yesterday, live today and hope for tomorrow.” 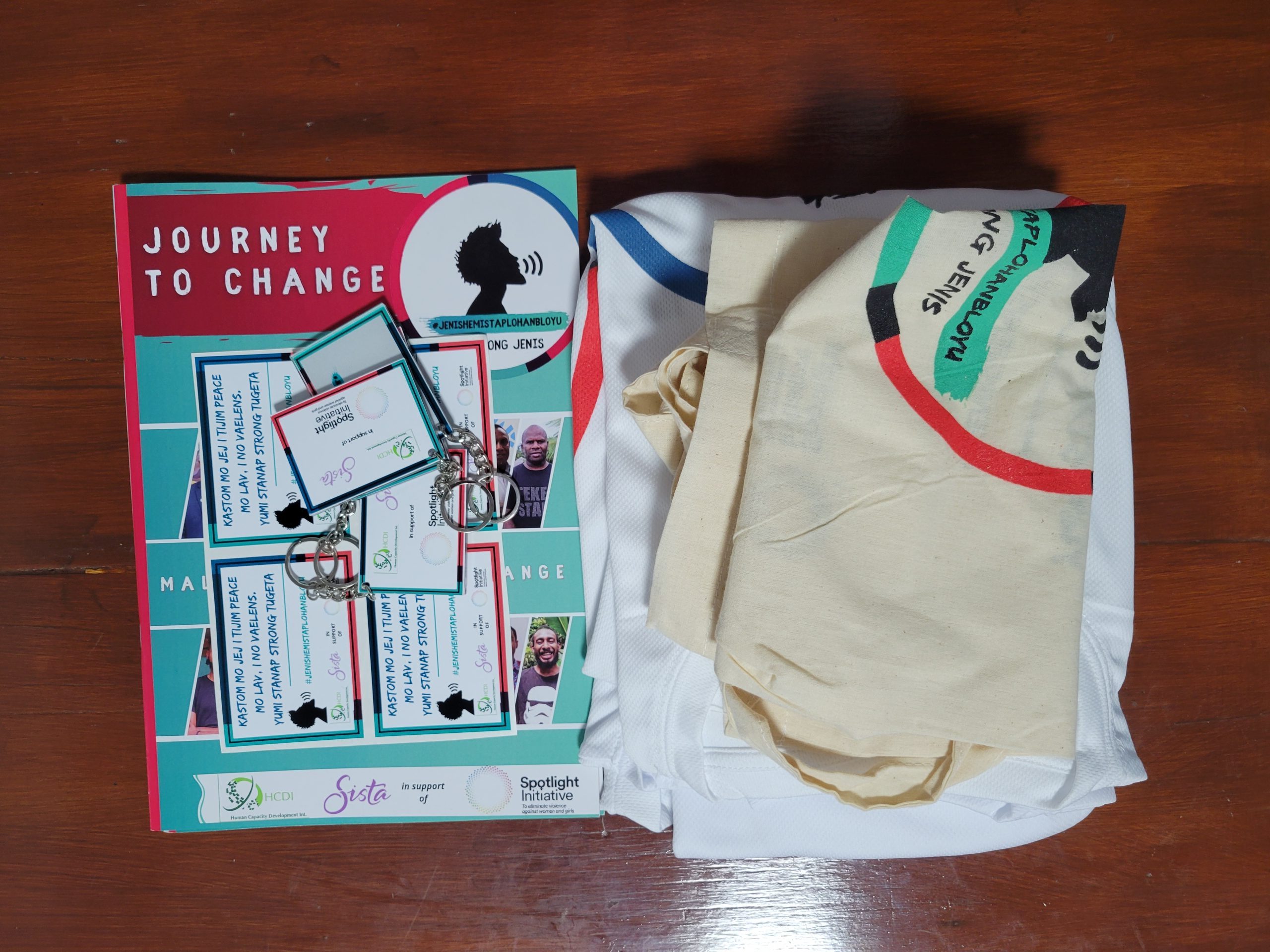 shirts, Stickers and keyrings) to all the Stakeholders and those who have participated  in the overall project especially in Interviewing and 16 DOA Campaign 2021. Starting from when The project began.

The ‘Round Table’ podcast, We Rise Coalition and PACMAS

We released two (2) episodes of our podcast – The Round Table. 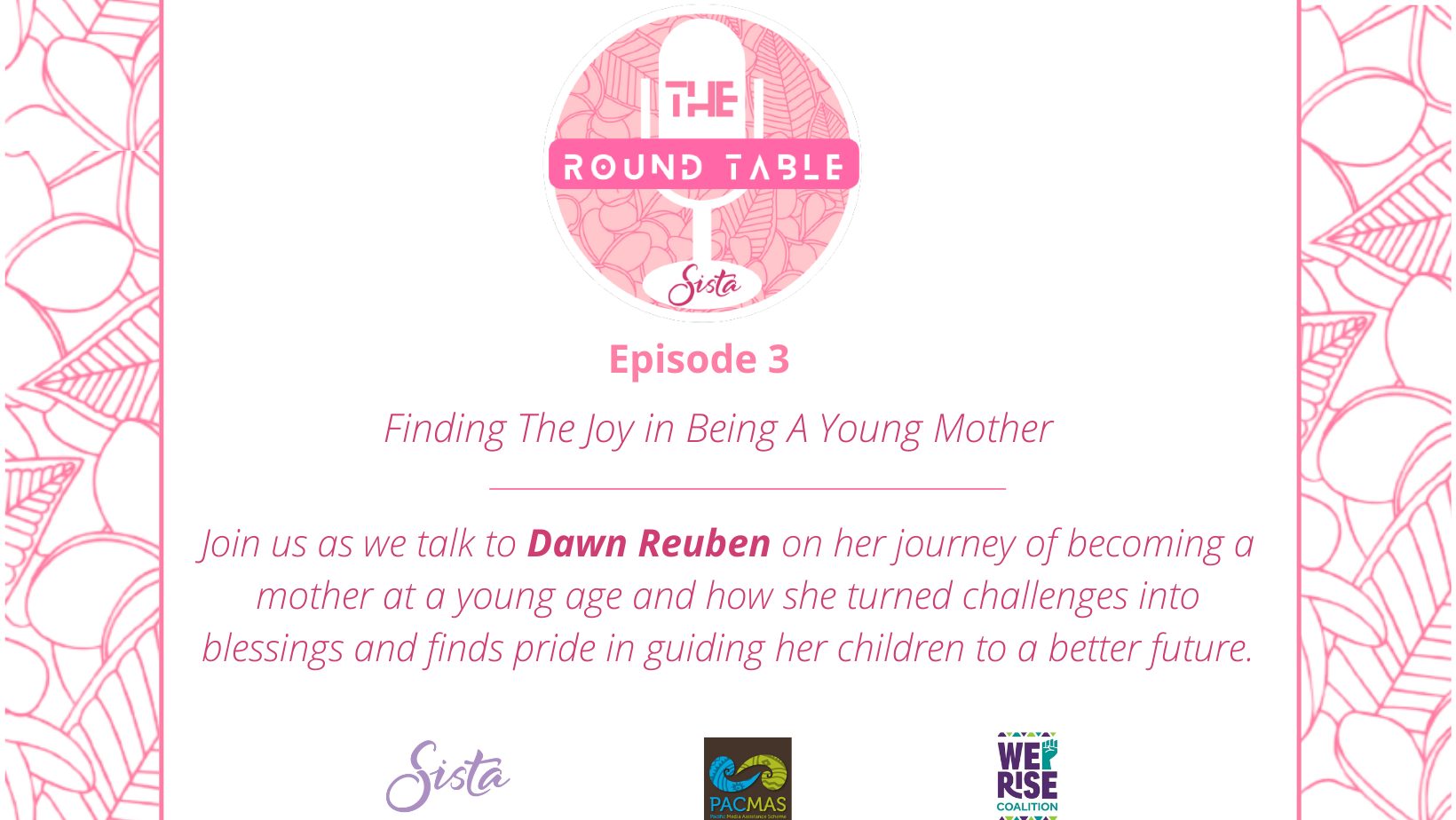 Episode 3 was released on the 14th, in the episode we talk with Dawn Reuben on her journey of becoming a mother at a young age and how she focuses on embracing the joy of motherhood. She explored how she turned challenges into blessings and found pride in guiding her children to a better future. 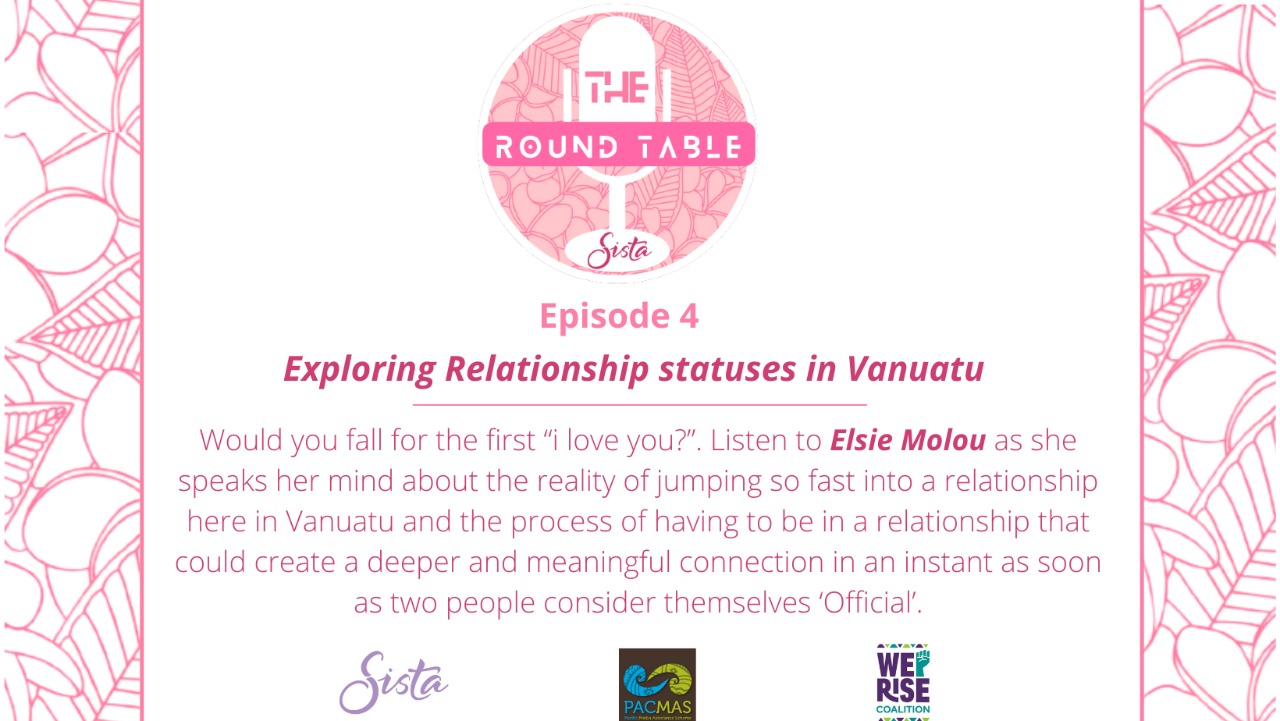 We released episode 4 on June 27, this episode focused on ‘Relationship statuses in Vanuatu’. Our guest was Elsie Molou, a young, modern Ni-van woman with much to say about what it is really like to be in a relationship here in Vanuatu.

Elsie speaks on having to choose between having a boyfriend or prioritizing her education , she speaks about balancing the two and finding what was best for her when making that decision to be or not to be in a relationship.

This podcast is supported by the We Rise Coalition and PACMAS.

On June 21st, we launched an online Sexual Harassment Campaign to raise awareness. We created a series of posters in Bislama.

The order of the posters we uploaded in June are as follows; 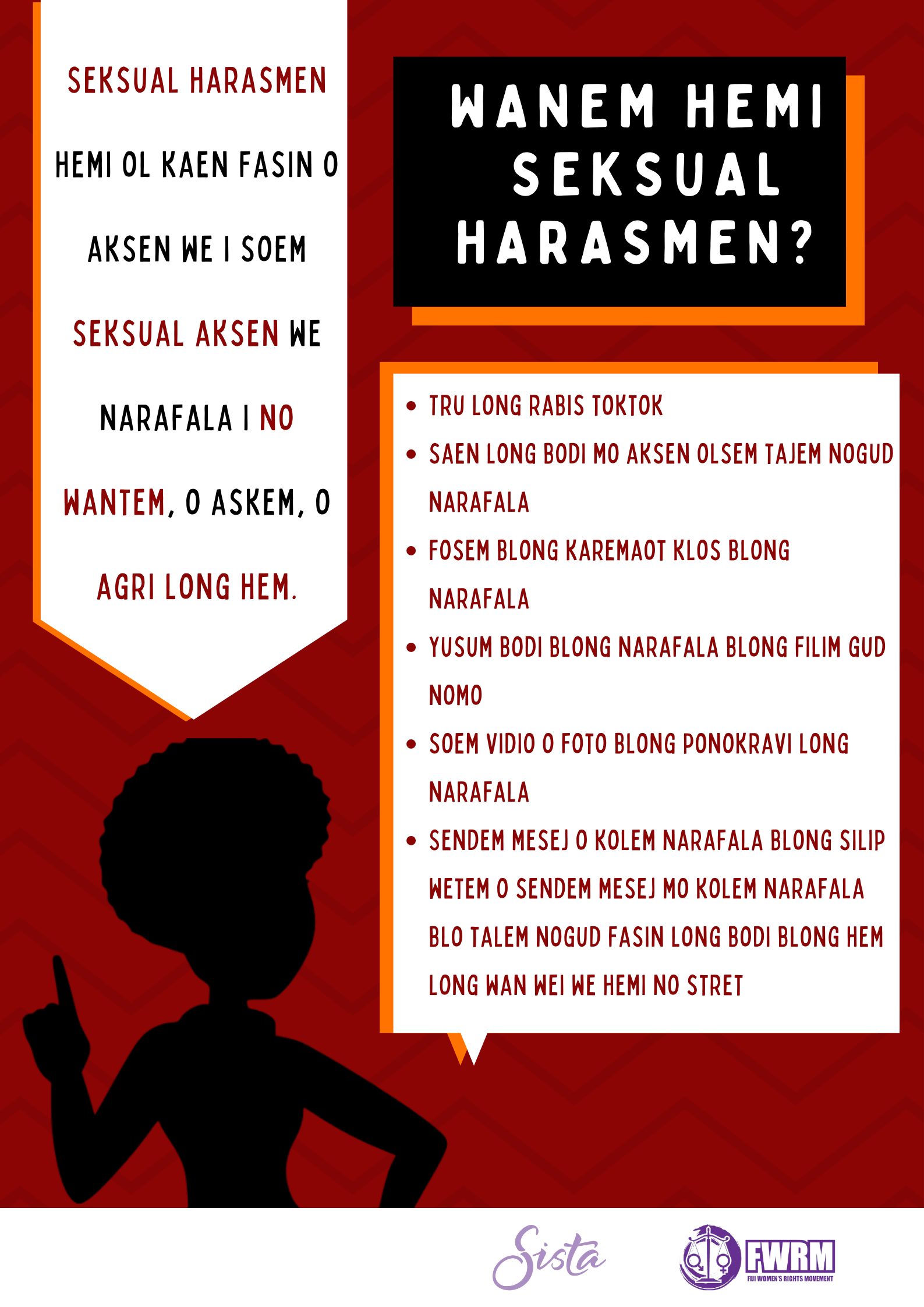 2.The Impacts of Sexual Harassment on Women and Girls 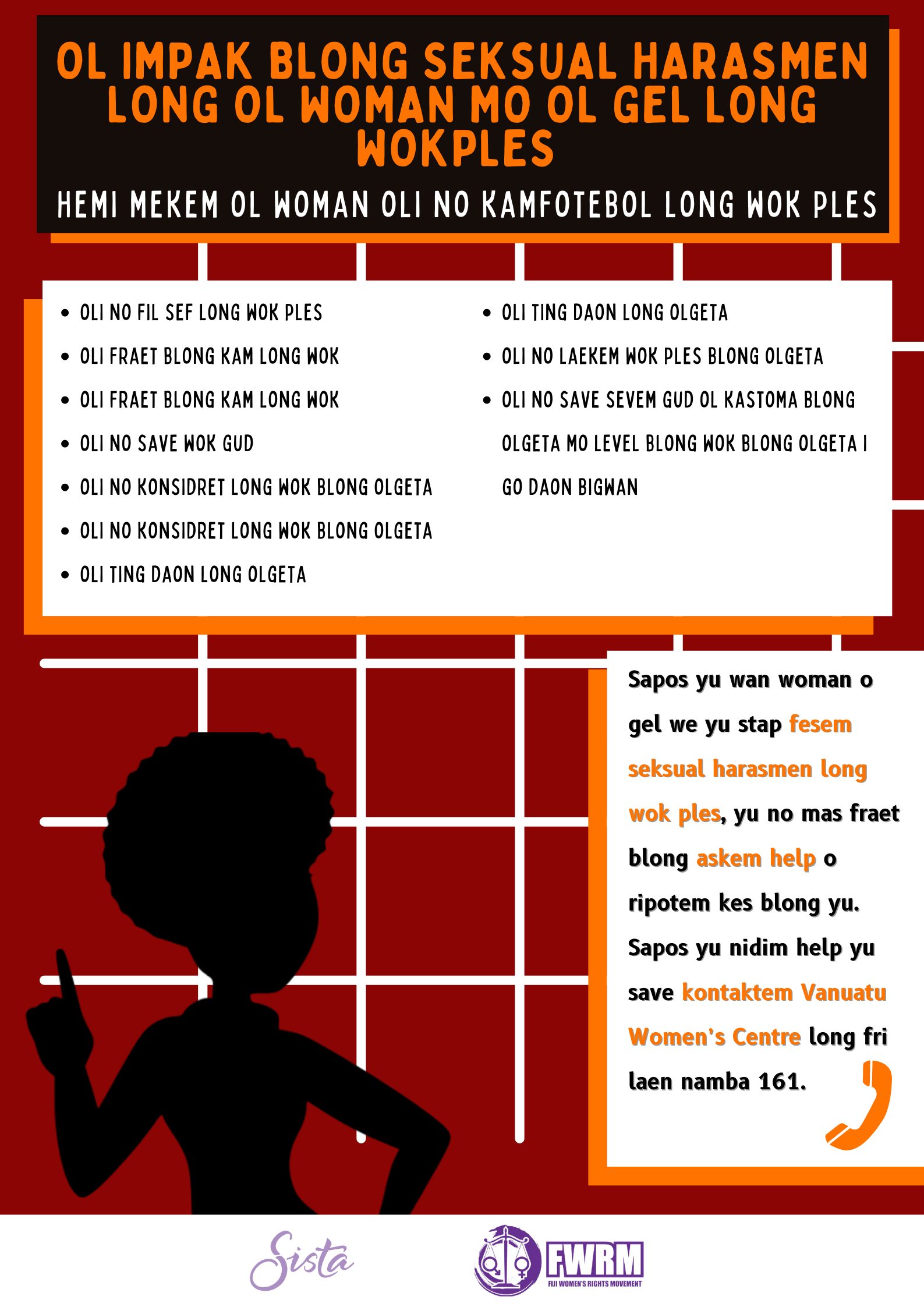 3. Every workplace should take the issue of Sexual Harassment seriously 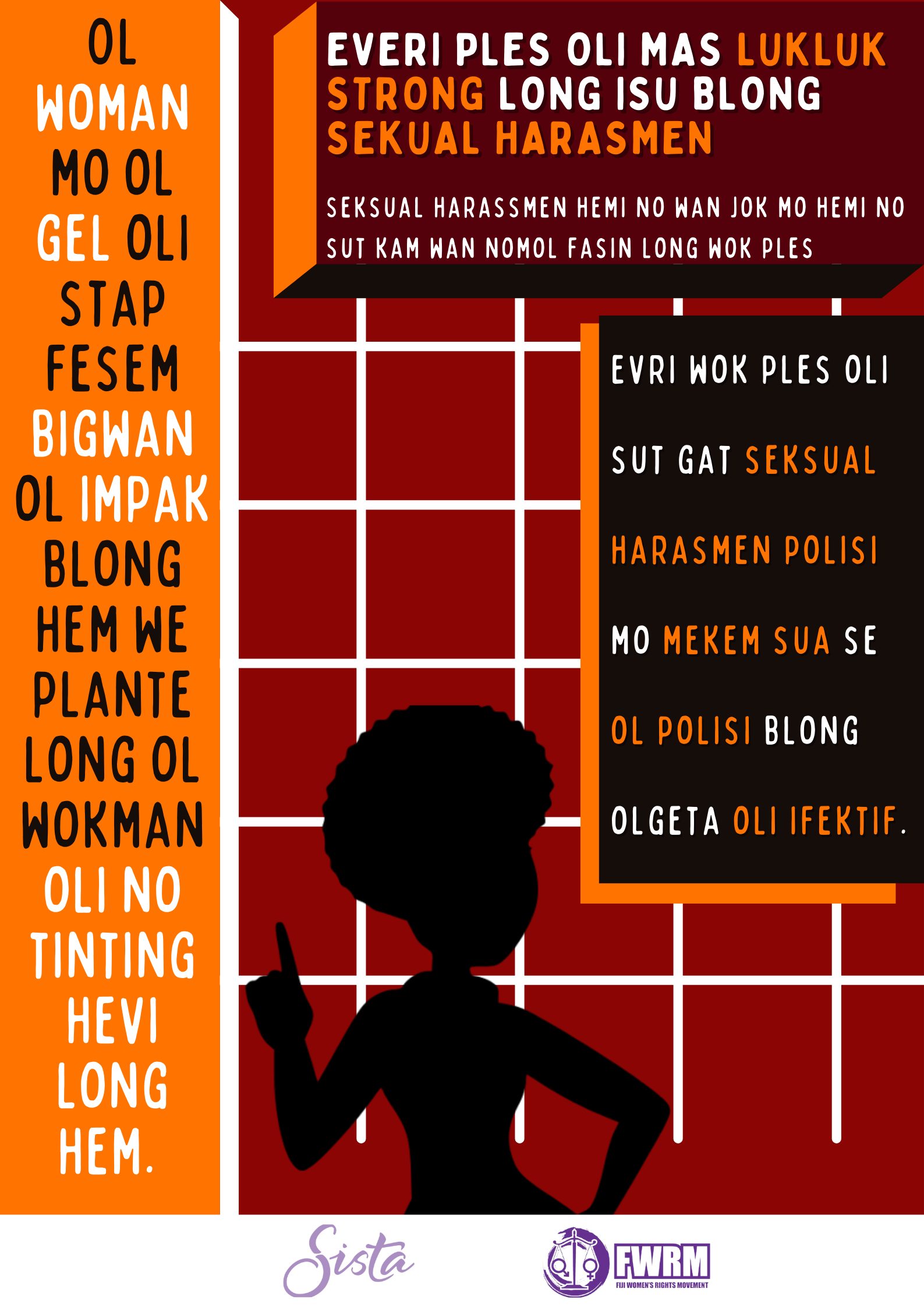 4. Why is it important for Vanuatu to have a Sexual Harassment policy? 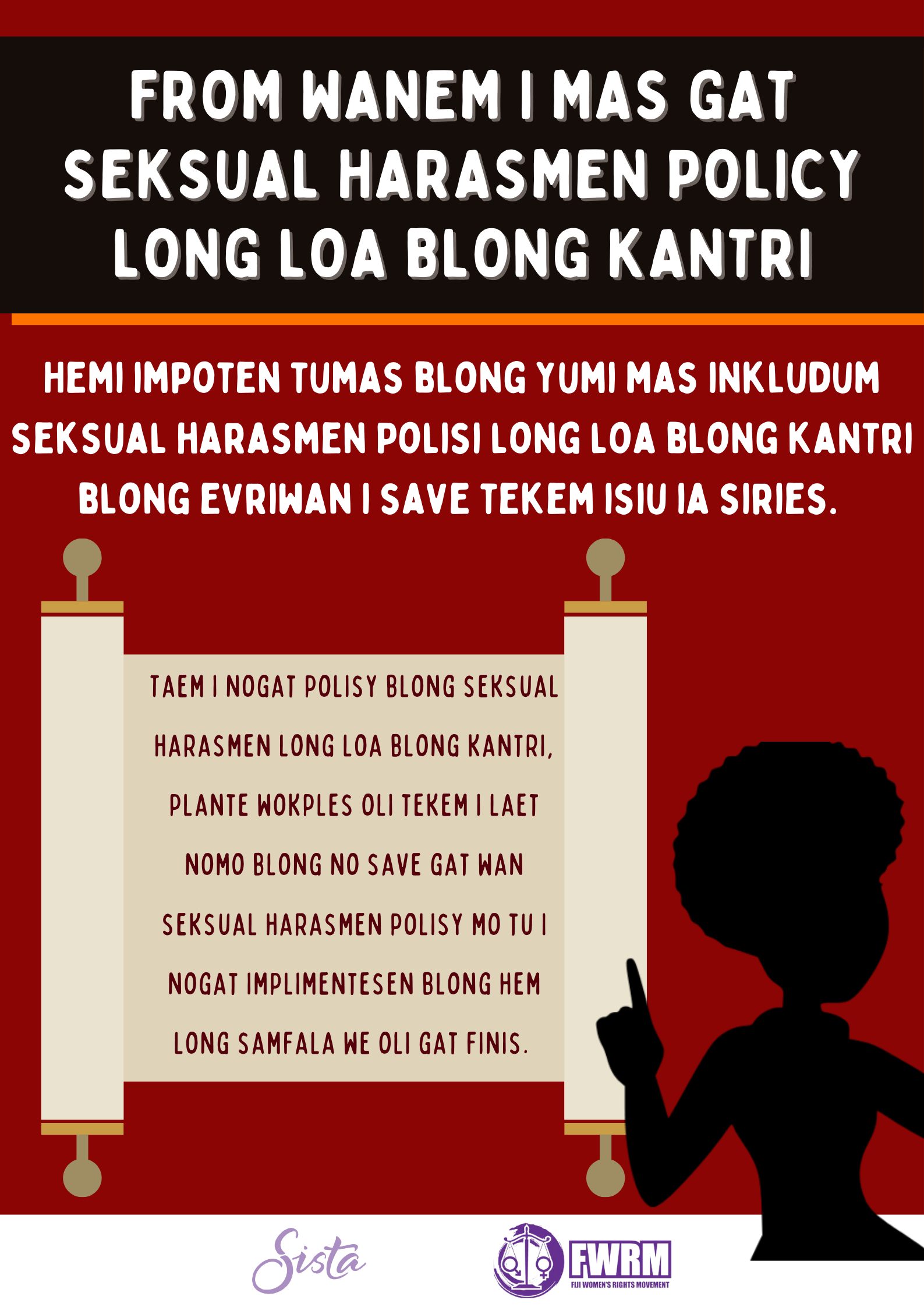 There is also a short video on the way so keep an eye out on our Facebook page! 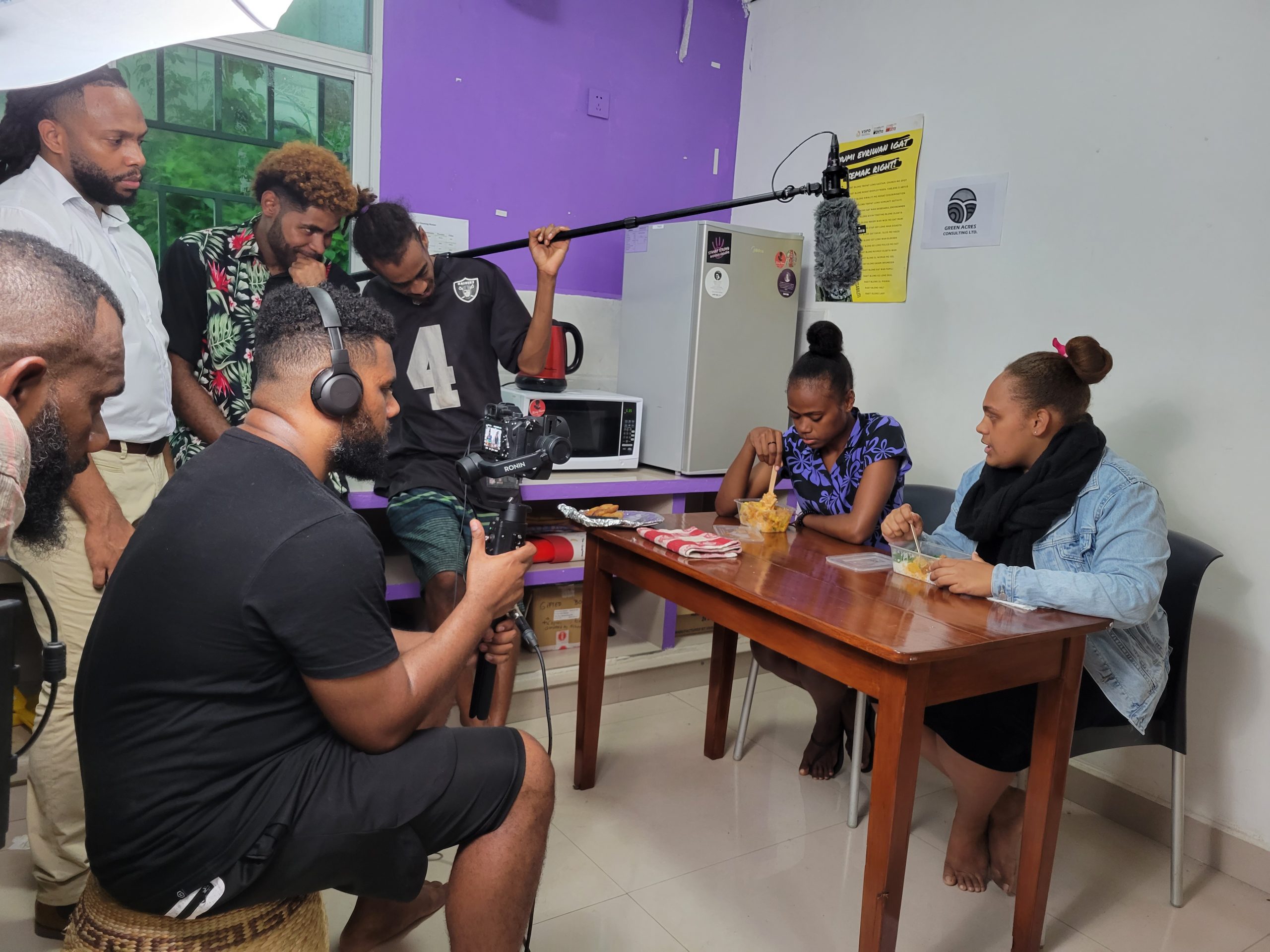 Our Projects Team along with Multi-media Production Unit – Matakambu filmed a short video for Sexual Harassment in the workplace awareness.

The Pacific Partnership brings together governments, civil society organisations, communities and other partners to promote gender equality, prevent violence against women and girls (VAWG), and increase access to quality response services for survivors. 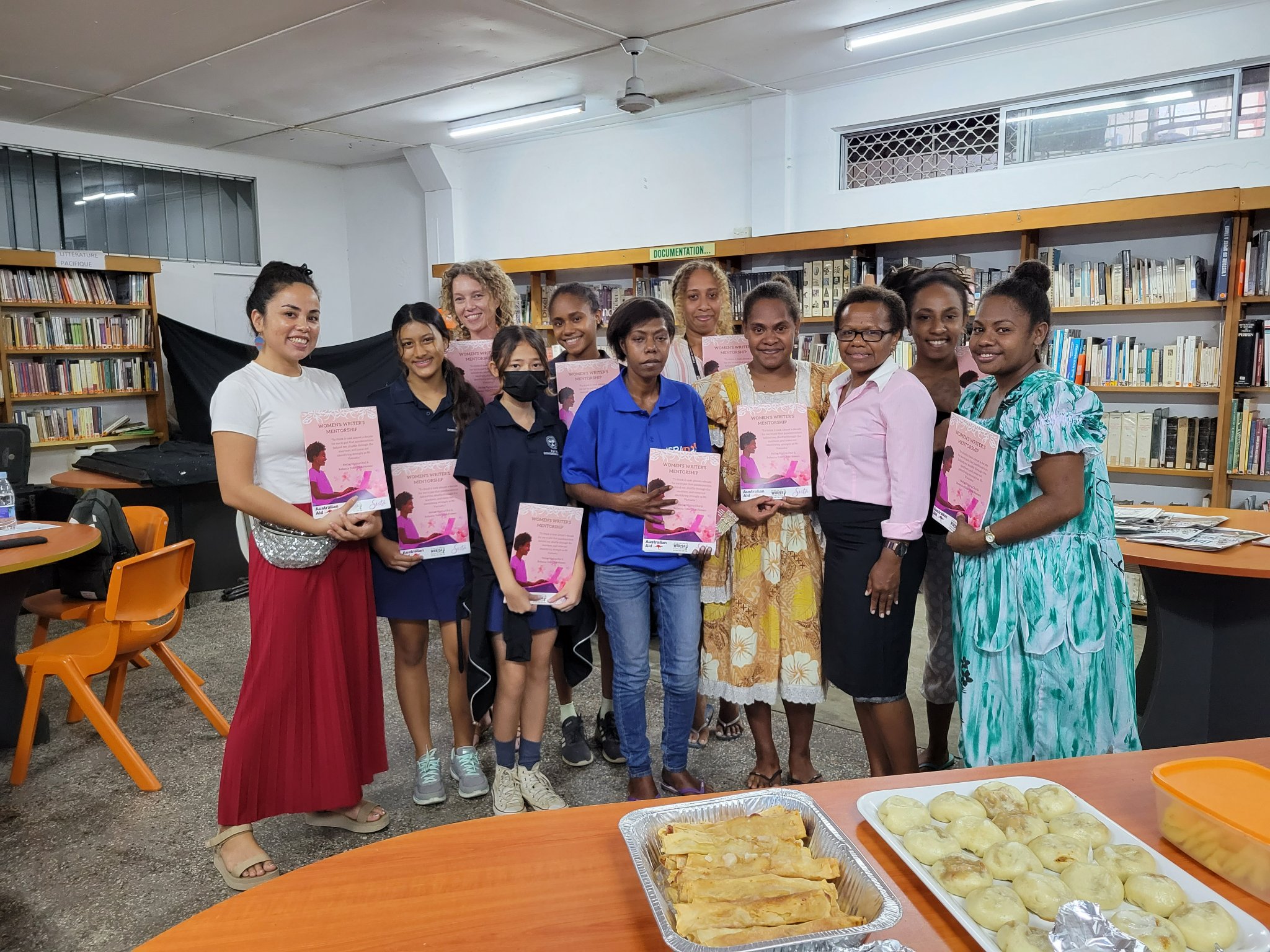 The workshop was led by accomplished author Rebecca Tobo Olul-Hossen who has just returned from being a guest at the Brisbane Writers Festival, and supported by the fabulous Sarah Freeman from GATE MINDS who shared insight on the role of language to create imagery as well as the power of persuasion.

These pieces will be published to Sista’s new website beginning on the 18th July, Nelson Mandela International Day, alongside a social media launch of individual author bio profiles responding to the question “How does writing allow you to use your voice on important issues?” and running until the 30th July, Independence Day.

This project is made possible with the support of the We Rise Coalition.

Sista is part of the regional working group for the Pacific Feminist Forum (PFF). The 16 countries across the region will be holding a national forum and planning and preparation is currently underway. Sista intends to partner with other women’s organisations and to hold the event in September. In the meantime, we understand the word ‘Feminist’ is not widely acceptable in Vanuatu and we will hold a workshop in lead up to the forum for those working in gender space. We have also translated the PFF action plan and charter in Bislama to familiarize our team on the purpose of this forum.

ABC invited women from across the Pacific who work in the media to articulate their vision for supporting women in their industry. Over a period of 3 weeks, participants generated a set of ideas that were focused on bringing about this change. Sista will be soon be conducting a survey and holding a forum for women working in the media, and how we can address their needs and bring out their potential.

‘Through the lens’ – part 3 and Nambanga pledge launch

One of our Project Officers, Rosina Kaimbang represented Sista at the launching of the ‘Through the lens’ film – part 3 as well as the Nambanga pledge.

Through the lens film was assist by the Balance of Power with the support of Australian High Commission and was filmed by Wan Smolbag (Francis Olul). It is about the life of Adele Aru, her beginnings to where she is today as the Chief Executive Director of Vanuatu Tourism Office. Her Story touches so many lives and it is a prove that women can be extraordinary in their communities.

Sista was grateful to have been invited by Balance of power to attend this wonderful event. 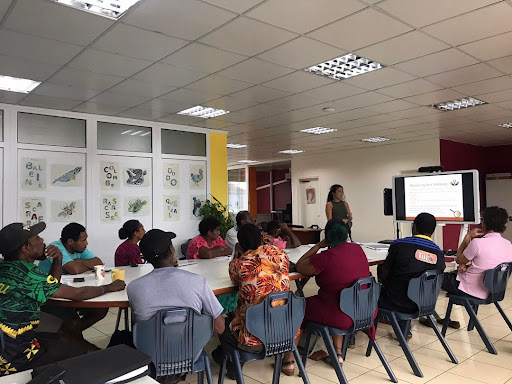 Our ED Yasmine Bjornum made some remarks on June 6 to a group of community organizations in the context of our Social impact program implemented with UNDP Pacific Office in Fiji. Our ED was very happy to share our journey with other community organizations to strengthen their skills in resource mobilization in V-Lab‘s social impact program through UNDP.

Sista wishes good luck to all organisations in their journey of creating change! 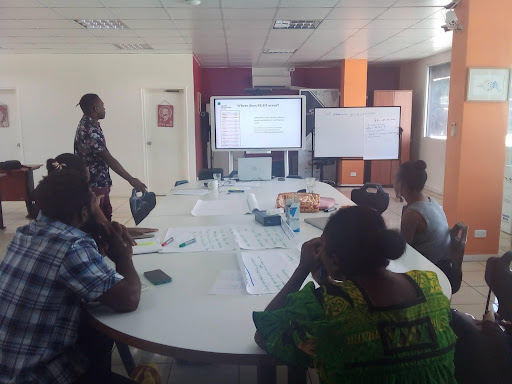 Sista, Finance & Program Manager Irene Abbock and Project Officer Rosina Kaimbang have the privilege to attend the PSEAH workshop facilitated by Engineer Without Borders Australia with other CSO’s and government departments such as Mama’s Laef, Department of Water, Land and Resource, Shefa Provincial Council to help develop and better improve on how to properly implement PSEAH Policy within its organization and how to manage SH cases throughout this humanitarian workforce.

Sista Finance, have had several back-and-forth zoom meetings with VNPF technical officers and VNPF relations officer to train Regina Ova, our Senior Finance Officer on how to use, manage and navigate around the VNPF online Portal, this is so that Sista can track and keep up with VNPF payments and Employee/ Employer contributions and we have also managed to help support two of Sista core staff in opening up their VNPF employee accounts. 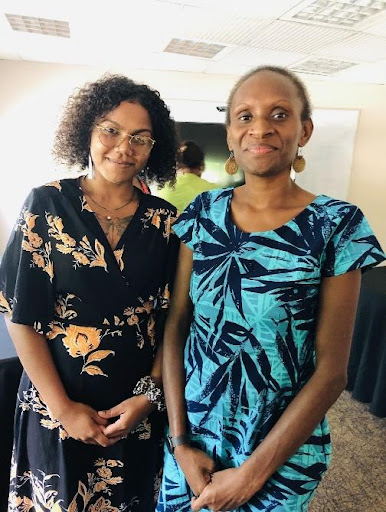 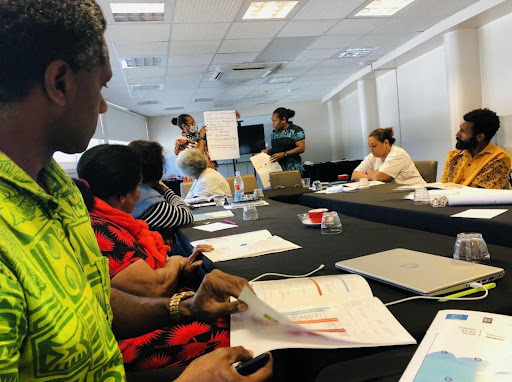 The workshop emphasized that the term Public Finance simply means money for the people and the people have the right to know how it is being utilized by the government and also how it has been acquitted and reported back to the public.

To sum it up, VANGO, TIV, NGOs and, CSOs are looking to collaborate more in the future and work hand in hand together alongside the government to help support and guide Vanuatu Govt Ministries with their decision makings, particularly in regards to the PFM. 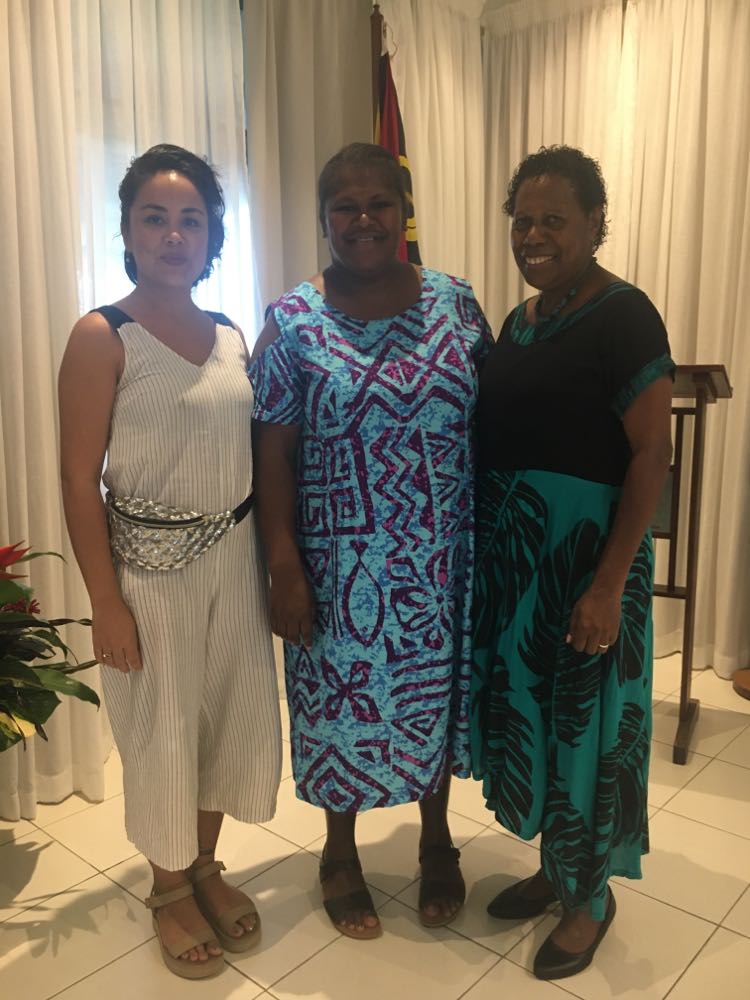 The ED was honored to attend a function at the newly appointed Australian High Commissioner Bootle’s residence to celebrate International Women’s Day. The 2022 Hanson Mataskelekele Award for Women in Leadership was presented to Ms. Dorosday Kenneth for her outstanding work to promote women’s voices and leadership in government. “Gender equality requires a different mindset. The journey to promote gender equality has been many years in the making. This award is not just for me it is for all women who are aspiring to take on leadership roles’ ‘ said Ms. Kenneth. The 2022 Andy Lynch Award for Excellence in the Community Sector was presented to Judith Iakavai for her tireless efforts to advocate for the rights of people with disabilities. When accepting her award, Ms. Judith said, “I wish to see many more young women and men in the disability inclusion space because inclusion needs to be on everybody’s agenda.”

On June 10th, the ED attended a panel discussion organized by Titan FX, NBV Bank and Balance of Power with the Department of Women’s Affairs to explore the bias women face. This game-changing event was held at the Grand and highlighted the important role that the private sector have to play to advance gender equality in Vanuatu.

Sista has undertaken partnership reviews with CARE and IWDA respectively to find ways to work better in the future. It has been an honor to work alongside CARE in Vanuatu and with IWDA across the region, and we look forward to more growth and collaboration in the future.

After advertising one year ago with no-one available in country, Sista and CARE have re-advertised the HR consultancy position and hope to find someone soon to help set up our HR system and align with our finance system.

Board restructure and strengthening

As the terms of the board have expired and Sista is rapidly expanding, we have been reviewing our constitution and membership and intend to have a new board up and running by October 2022. In the meantime, Sista is accepting nominations for board members prior to election in October. 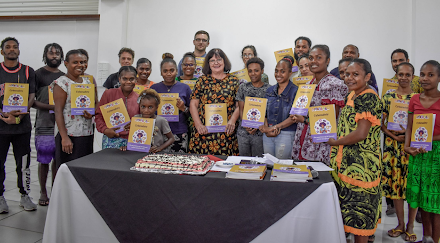 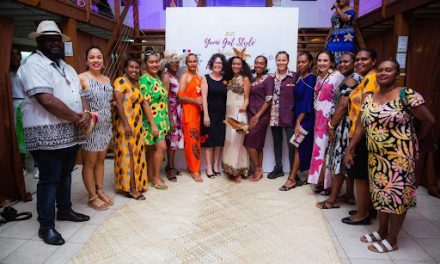 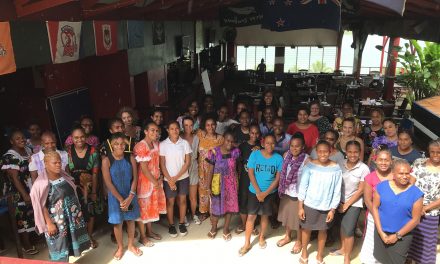 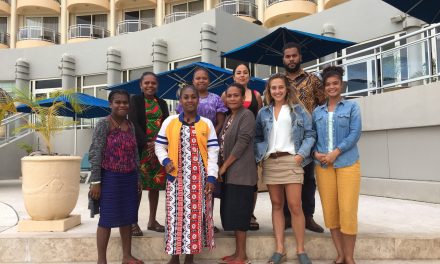