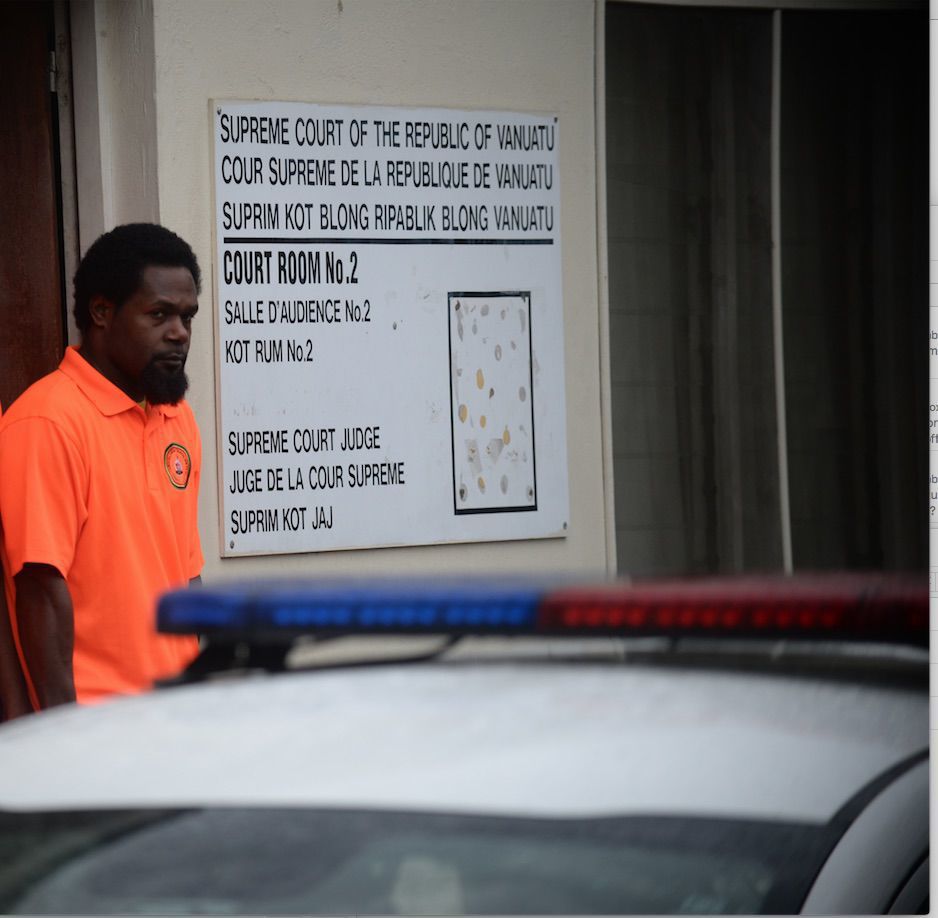 A child rapist and murderer has been sentenced to life imprisonment.

The sentence — one of the harshest penalties ever in Vanuatu’s court history — was handed down to Bob Robert inside a packed courtroom yesterday morning.

Close relatives of the victim said the penalty was satisfactory to the family who gave up everything to take Robert to justice for taking the life of their only daughter, six-year-old Florence Iaruel.

Florence’s mother burst into tears when Supreme Court Justice Gustaaf Andrée Wiltens started recalling moments of the final horrific hours that her daughter had to go through, without any help, before her dead body was found near a plantation at Etas in April 18, 2018.

Tomorrow will mark a year since the day Florence was tragically taken from her bereaved family.

“The poor innocent 6-year-old child was abused by Robert, while he was on parole, in ways that most people in our society simply cannot imagine or understand,” Justice Wiltens said. “The sexual offending was truly depraved and reprehensible conduct.”

The Supreme Court Judge added, “Prior to using his undoubted boxing skills and experience to end Florence’s life in the most violent way imaginable, Robert treated her in an abominable way for his sexual gratification.”

The court heard that on the evening of April, 17, 2018, and through to dawn of the following morning, Robert had been drinking kava and alcohol.

Just after midnight he entered two separate homes with the intent to criminally offend. At the first house, Robert went to the bedside of a young 9-year-old girl and knelt down over the girl before her mother sounded the alarm. At the second home, he attempted to enter into a room occupied by a young 4-year-old girl who was sleeping inside. He fled when the mother sounded the alarm again.

Justice Wiltens agreed that Robert’s intention when he entered both houses was to have sex with a young child.

After two failed attempts, Robert went to where Florence was. He admitted to forcing her to go with him with the intention “to have sex with her”.

He blocked her mouth to stop her from crying out loud and took her some distance away from their sleeping house where the sexual offending took place. He then punched her chest repeatedly to end her life, in fear of going back to jail.

The late victim was discovered by her uncle and two cousins at about 6am on April 18, near a sandalwood plantation.

A post-mortem examination was conducted by Dr. Kaloulgivaki, two days after the incident. The cause of the late victim’s death was certified to be severe hemothorax cause by severe traumatic chest injuries and multiple other traumatic injuries which were caused by blunt force (a pooling of blood in the chest cavity).

“The examination revealed that prior to death, multiple traumatic injuries had been caused by blunt force trauma.”

DNA samples were also collected and matched that of the defendant.

Justice Wiltens acknowledged three mitigating factors. These included a custom ceremony which was performed on behalf of the defendant. He did not participate in that ceremony. Wiltens said the ceremony does not amount to significant mitigation.

Robert has pleaded guilty to all the charges against him. The judge also noted that the pleas were not at the first available opportunity. He entered his pleas after taking legal advice.

Wiltens also noted that the defendant cooperated with the police during the investigation period.

Justice Wiltens said given the gravity of Robert’s offending there is no possibility for any of the sentences to be suspended.

While the defense legal counsel is yet to indicate whether or not it will file an appeal, members of the public have welcomed the Supreme Court decision.

Minutes after the sentence was imposed, Daily Post observed the massive debate it sparked on social media as members of the public applauded the verdict as a milestone in Vanuatu’s judiciary system after criticising the judicial system for being too lenient with murderers and rapists in the past.

The sentence yesterday also reflects the amendment to the Penal Code [CAP 135] by former Justice Minister Ronald Warsal in 2017, which increases the maximum penalty for unlawful sexual intercourse with a child under the age of 13 years from 14 years in jail to life imprisonment.

This case has set a precedence to any similar case in the future and will also serve as a deterrent message to all offenders.

The defendant, through Defense lawyer Kylie Karu has 14 days to appeal these sentences if he so chooses.