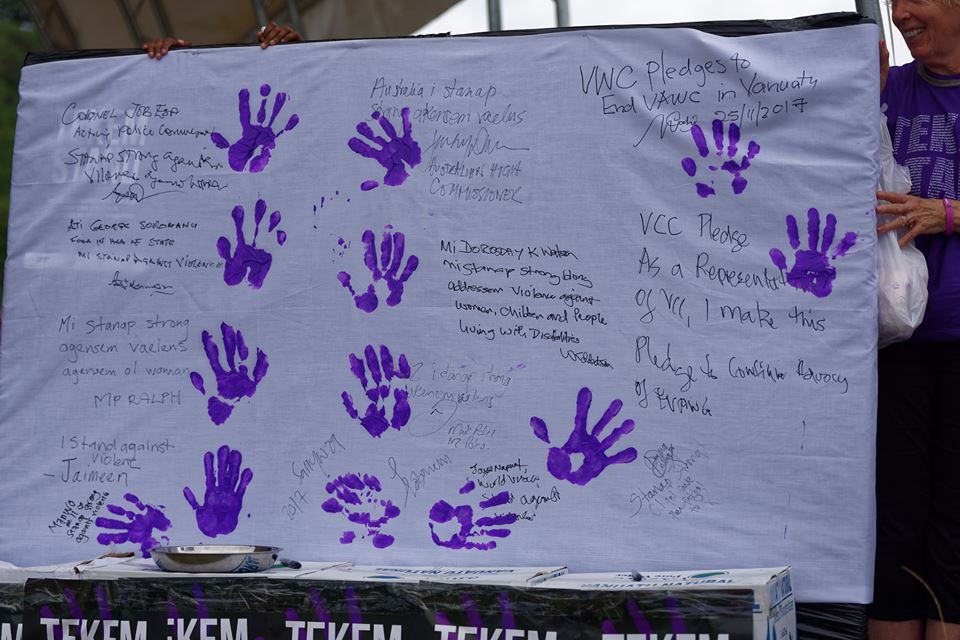 Speeches, music, purple hand-paint marks and signatures, give-away brochures and wrist bands were handed out to commemorate the event.

Highlight of the occasion was when the leaders took their pledges to end violence.

Besides the launching of the 16 Days Activism, it was an occasion for VAN2017 to test out the crowd arrangements and test the sporting facilities at the Korman sporting complex.

Many leaders came forward taking their stand and publicly pledged against violence, particularly against Women, children and impaired people.

Former Head of State, George Sokomanu announced, “As a chief, a leader in my community of Mele, a member of the Presbyterian Church of Vanuatu, someone who knows well our islands from up north to south, it’s been 37 years since 1980s, that I have watched the growth of our population over the years, and we witness again the occasion of this landmark that many things are happening in our nation today, and if there is a need to address them let’s do so.

“I stand to pledge myself and my family to wipe out violence especially against women and children, in Vanuatu.

“The Government must do its work, the chiefs as well and even us; each and every individual in the community we need to do our task to help us all stop the bad behaviours from happening in our country.

“Today people are saying Vanuatu is the best place in the world, and it would not be a happy country if we continue to condone violence so, let’s defend our country and stand against Violence in all its forms,” the former Head of State concluded.

The 16 Days of Activism is celebrated annually and globally.