Over 21,000 voters in four constituencies – Ambae, Maewo, Banks and Torres – will exercise their right to vote today, because of the delay in delivery of the ballot boxes yesterday.

“The severe weather disrupted the delivery of the ballot materials but voting can proceed tomorrow (today) after RVS Tukoro delivered the materials,” Principal Electoral Officer, Joe Iati, told Daily Post last night. “We urge all registered voters in these constituencies to turn up at their respective polling stations and exercise their right to vote.”

In PENAMA, voting in Pentecost went ahead as planned. Staff of the Electoral Office were busy arranging ballot boxes for Ambae and Maewo yesterday while voting throughout the rest of the constituencies proceed, despite delays in some polling stations in some some constituencies.

The turn-out of voters in constituencies throughout the country yesterday showed that the citizens of Vanuatu realized the importance of their right to vote for change in Vanuatu’s political arena.

Daily Post Reporters covered national general election polls in most major centers and constituencies throughout the country yesterday, highlighting a number of key factors including: early turnout to vote at 5.30am, standing in long queues in the sun to vote, positive turnout of voters in polling stations, young eligible voters turning up to exercise their rights in choosing new country leaders, elderly people as well as pregnant mothers and disabled citizens who showed they are determined and have equal rights.

Former MPs, leaders and statesmen, showed up early to show example on responsibility to the nation.

Despite administrative hiccups such as, delay in arrival of ballot boxes at polling stations, delay in receiving stamps, briefing of polling staff, finding curtains for polling booths, rain and heat of sun in some polling stations, the voters remained determined all throughout to ensure they cast their votes for the new leaders of their choice for the next four years.

The voters turn out in thousands at polling stations around the country, proved that the citizens of Vanuatu determined to vote despite the fears of the coronavirus confronting the country and the world. They braved the situation, casted their votes and now retreat to await the results of the 19th March 2020 general election.

In some polling stations, voters did not vote until 8.45am due to the lateness of administrative arrangements by the Electoral Commission and Electoral Office. However, polling went ahead as voters turned up in massive strength to cast their votes.

The Ex-FOL polling station which was moved to Lycee Lab, saw early voters turn out that showed citizens determined to vote for leaders of their choice. The polling station has 6,261 registered voters.

At the Anglican Church Hall polling station in Port Vila, 200 voters arrived at the polling station at 6.30am and had to wait an hour before casting their votes at 7.30am, the official opening hour for voting. It is an indication of voter’s determination to cast their votes for leaders of their choice. Voting started at 9.30 am, while voting at the Fresh Water school began at around 10.00 am, again due to waiting for the stamp.

The Electoral Commission approved for the Anglican Church polling station to open until 6.15pm for voters to cast their votes, because it opened late.

The largest polling station in Vanuatu, Mele Village on Efate, saw thousands of voters turning up early to cast their vote including the former head of state Ati George Sokomanu, along with elderly men and women.

Voters on Uripiv Island polling station, Malekula though turned up in strength and early, had to wait for some time because the polling station ran out of ballot boxes, while more ballot boxes were ferried from Lakatoro on the mainland, to Uripiv island. The island reportedly has 509 registered voters.

At the Lakatoro polling station, voters lined up early in the morning to cast their votes, including pregnant mothers, elderly and the disabled, who honored their right and commitment to the nation to elect new leaders into the 12th legislature.

Voters at the Banban polling station in Santo turned up to vote 6.30 am, and braved the rain with umbrellas to cast their votes.

On Tanna, the Vanua’aku Pati President, and former MP Bob Loughman, was amongst the early voters to cast his vote at Loukatai polling station.

A good turnout of the 1,343 registered voters at Lamnatu polling station was reported.

The Tahu polling station on Tanna also saw a massive turnout of registered voters who turned up early to vote indicating the desire of the citizens of Vanuatu, to elect leaders into the 12th legislature.

Reports from Paama indicated 256 voters at Tahi polling station cast their vote and 338 voters at largest village of Liro polled, despite rain on the island which did not disrupt the voting process.

Voting at Epau polling station went well but there were names of voters that were not on the electoral roll and in some cases, there were different names.

1, 817 voters were registered to vote at Kalmet school but voter turnout is yet to be determined. Voting was delayed in the morning because officials here had to find curtains for the polling booths before poll could go ahead at 8.40am. 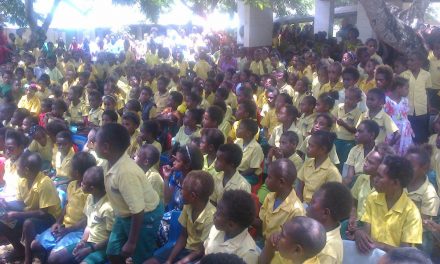