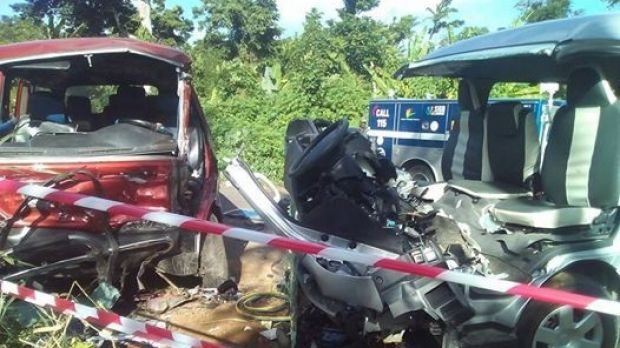 In the past five months, Vanuatu’s public transport system has made negative international headlines. First was the incident that occurred on February 26th where local transport operators threw rocks at a tour bus filled with passengers at the wharf. This resulted in approximately 450 passengers being stranded onboard their ship after the cruise’s security personnel deemed it unsafe to enter Port Vila.

The Vanuatu Mobile Force, National and Municipal Police were called in to secure the wharf area to ensure public safety. It’s believed this incident could have been prevented as only a week earlier on February 20th, a security officer aboard the Dawn Princess had written an email to the Vanuatu Ports and Harbor Authorities, expressing his concerns about the aggressive and threatening behavior of taxi and bus drivers towards passengers.

Less than a month later on March 13th, the Vanuatu Helicopters manager Florence Lengkon was kidnapped from her workplace and beaten by local bus drivers. The men had taken offence to comments she had written on social media forum, Yumi Tok Tok Stret, regarding the rock throwing incident. Hundreds of comments were made regarding the incident, many of them containing profanity, and it remains unclear why Ms. Lengkon’s comment was singled out to incite the mass act of violence. Her assault resulted in a historic march against violence on March 23rd, which saw more than 600 protestors marching through the streets of Port Vila to demonstrate their solidarity with Ms. Lengkon and to petition the government for change.

Recently on June 20th, two buses had a head on collision at Erakor road leaving 3 people dead, including an eight-month pregnant woman and her unborn baby, and 12 people were seriously injured. The passengers had arrived in Vanuatu on board the P&O cruise ship Pacific Dawn and had to be airlifted out to Noumea and Australia. Upon release from hospital, one of the drivers was charged with reckless driving. It is believed he momentarily drove on the wrong side of the road causing the tragic accident. 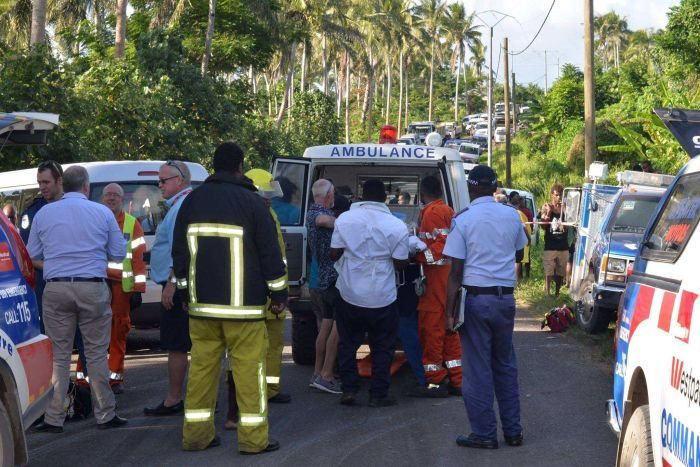 This latest fatal incident has illuminated the current state of Vanuatu’s public transport system and highlights what the community and authorities already know – something needs to change. Let’s not forget about other incidents that have occurred concerning the unprofessional and unethical behavior of local transport operators. It may not have made international headlines but it deeply affected the local community. In April this year, a young girl jumped to her death after trying to escape sexual harassment from the driver of the bus she was on. This is not an isolated incident. Last year in July 2015, two girls also jumped from the window of a bus in Beverly Hills to escape sexual harassment.

Only last week an unnamed woman wrote to the Daily Post describing how a taxi driver had tried to assault her after she had overtaken his vehicle. Many young women in Vanuatu describe being subjected to catcalling from passing drivers as they walk on the street. This is unacceptable behavior and is a form of sexual harassment.

Other concerns by the pubic include unlicensed drivers; drink driving, reckless driving and driving in vehicles that aren’t roadworthy. A major issue being raised is the amount of buses that are on the road. A drive from the market house in town to Tusker roundabout in Tagabe saw a total of 127 buses. At the moment there is no threshold for the amount of public vehicle permits being issued and at the time of release, the Director of Customs was unable to provide information on the exact number of public transport operators. 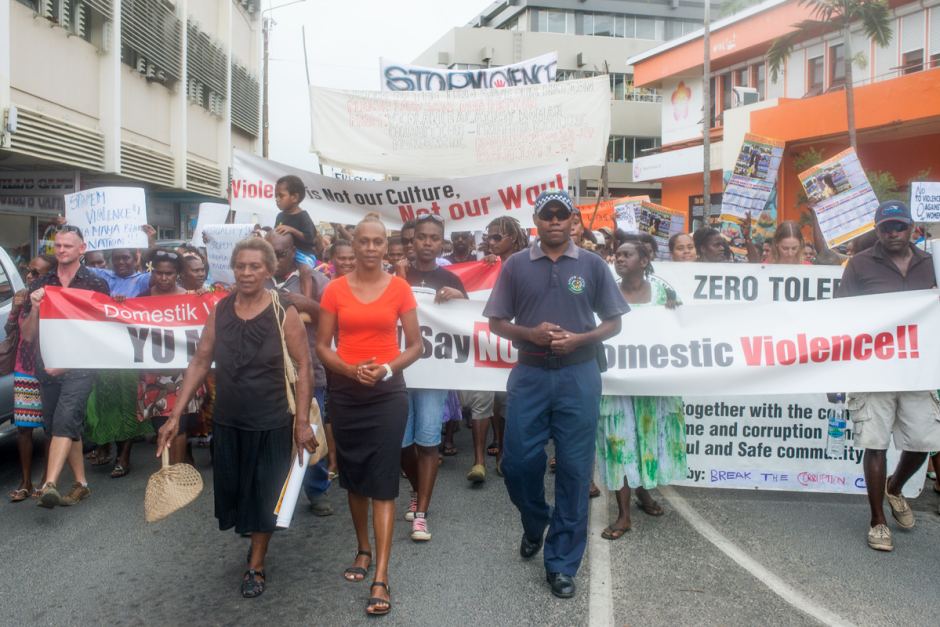 The unknown number of buses on the road is a major problem. Besides causing unnecessary traffic jams, it is also the reason why there is tension between public transport operators and tour operators when a cruise ship arrives. The excessive numbers of taxis and buses have to compete with tour operators for a limited number of passengers. As there is no standardized fee, bus drivers can charge unsuspecting tourists as much as 1000vt per person to just go into town, leaving little to wonder why buses flock to the wharf when a cruise ship is docked. Port security alone cannot manage the influx of bus drivers.

Prior to the Erakor road bus crash, Mr. Stanley Trief, the Manager of Customs Border and Enforcement, had raised his concerns about the poor state of the public transport system and number of unqualified drivers to the Minister of Internal Affairs in March. In the aftermath of the fatal accident, Mr. Trief decided to release the open letter he had written to social media. He wrote that the public transport system in Vanuatu is ‘unreliable, unsafe and of a very poor standard’ and ‘is so repulsive that it makes that it makes headlines in the region of its negative impact on Vanuatu’s tourism industry. It is basically a national disgrace, to say the least.’ Mr Trief called for tougher legislations and strict reinforcement including vehicle inspections, police background checks, medical certificates and the introduction of licensing fees in order to facilitate a professional and reliable public transport system. Mr. Trief’s letter was well received by the public but he told the Daily Post that he is yet to receive a response about his recommendation from the Minister of Internal Affairs.

Chief Executive Officer of the Land Transport Authority, Mr Sandy Banga, said that improvement of the system would occur once a budget by the government has been allocated. He admits that there are many issues that need to be dealt with. Hopefully these improvements will occur soon as this week the Land Transport Association received Vt7, 000, 000 from the supplementary budget. The President of the Port Vila Efate Land Transport Association (PVELTA), Donald Satungia, said that he is ready for positive change and with funding assistance, the PVELTA can start taking the necessary steps to improve Vanuatu’s public transport system.

The PVELTA Regulations rulebook is currently being drafted and once established, Mr. Satungia hopes that it will ease the many complaints the PVELTA receives. He says the association will work closely with relevant government departments by using new technologies to strengthen regulation and re-enforcement.

Although the Public Land Transport Act 2015 is supposed to govern land transport, the rules are not strictly enforced. The governing body is the Public Land Transport Authority and all provinces have their own associations, which are required to register under the Authority, including all owners and drivers of public land transport. The Act has requirements with the issuance of public transport driver permits including attending trainings for a fee. When the bill was being tabled in 2015, it also suggested trainings from the Department of Tourism to transport tourists.

Two permits are supposed to be issued – one for the general public and one for tourists. Training must be successfully completed prior to issuing each permit and it must be clearly displayed for passengers to see. Permit officers are required to issue such a permit only when they are satisfied that certain requirements have been met including, that the vehicle has been issued with a certificate of roadworthiness, that the vehicle is properly equipped for transporting, in comfort and cleanliness and the number of persons it is permitted to carry. The establishment of the rulebook will provide a strong foundation to ensure that the Public Land Transport Act 2015 is also upheld.

‘The government hasn’t put in effort in the public transport sector. I’ve been at PVELTA since 2012. I am a bus driver and a bus owner. I know the areas of public transport very well because of my experience. I am trying really hard and although we are a private sector, we want to set up a good system,’ said Mr. Satungia. ‘The rulebook will deal especially with bus drivers.’

The rulebook will include a code of conduct and screening of bus drivers. Training needs to be completed before a permit is given and there will be a threshold of permits being issued. Buses will not be allowed to pick up tourists if they don’t have a tourist permit. Mr Satungia hopes that overall operation of land transport can be narrowed down to one place. ‘We want to be the body that can issue permits, provide training, authorize suspensions and revoking of licenses if the code of conduct is breached. If a bus driver acts inappropriately, he has to go through the lengthy process of the courts, then his license is removed. We can make the process shorter and easier and provide the appropriate disciplinary action.’ He also said that permits shouldn’t be issued by Customs as they have other priorities. ‘If we issue permits, we also know how many buses there are on the road,’ he also said that PVELTA would like to install bus stops and possibly create bus routes during peak hours. ‘We want to help,’ Mr Satungia concluded. ‘There is big work to be done.’ 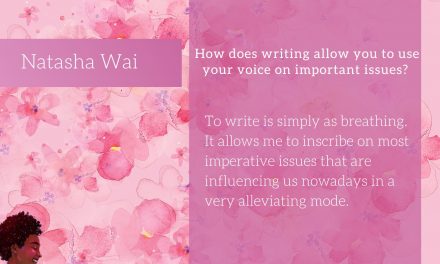 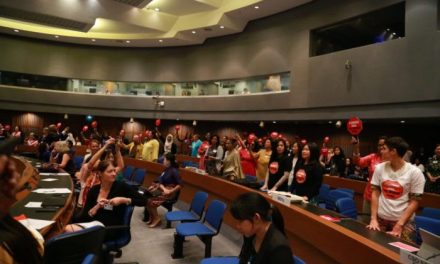