A man has been sentenced to eight years behind bars after he admitted he and his wife raped a child that was living under their care in Tutuba, Santo.

Justice Oliver Saksak told the man who could not be named that he was lucky his wife was not charged, otherwise both of them would have ended up in prison for the offences.

The victim was living with the defendant after her parents separated some years ago.

Justice Oliver Saksak sentenced the man to 13 years imprisonment as the starting point for aggravated sexual intercourse with child and six years for raping a child under his care and protection.

He then ordered the sentences to be served concurrently meaning the man has to spent 13 years in prison.

But while considering the mitigating factors, justice Saksak said that the rapist has an unblemished past record and cooperated well with the police during the investigation of his case.

He said the man has shown interest to perform a custom reconciliation that convinced the court to reduce the sentence to a year leaving the balance of 12 years.

The court further made one third reduction for the guilty plea leaving an end sentence of eight years imprisonment.

He then backdated the sentence to May 25 when he was first taken to custody.

The facts the man agreed with revealed that he started forcing the victim for sex in 2014 when she was in primary school and later in secondary school and continued until March this year when the matter came to light.

Justice Saksak said that the man was having sex with the victim whenever he goes fishing with her and threatened to beat her with a piece of wood or gas pipe when she refused.

He said that the man abused the victim so many times at home and even when she was at school.

He said that he became jealous and went as far as wrote letters to other persons warning them to stay away from her.

“You treated her as your real wife”, he said.

“There where times where your wife also involved in the sexual activities that you had with her and she is lucky not to have been charged”.

The judge said the man has ruined her life by having unprotected sex with her exposing her to sexual transmitted diseases and teenage pregnancy.

He said that the victim will relive those abuse for the rest of her life.

He said the man is a mature and married man with responsibility as a father to take care and protect her but instead he abused the trust placed on him by selfishly taking advantage of her age and to sexually abuse her subjecting her to sexual pervasions to gratify his lustful desires.

“And now that all have come out into public arena, you ought to be really ashamed of yourself,” he said.

“But you do not appear to be so and your actions must be denounced in the strongest terms”.

He then gave 13 years but later reduced to eight years giving the defendant some credit from the mitigation factors.

The man is now sitting behind bars at the Luganville Correctional facility. 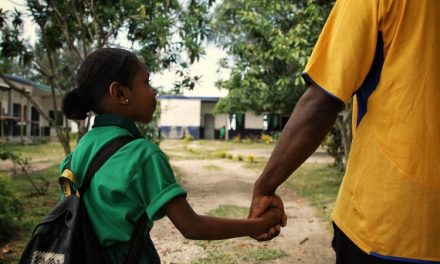 Schools to reopen on Monday