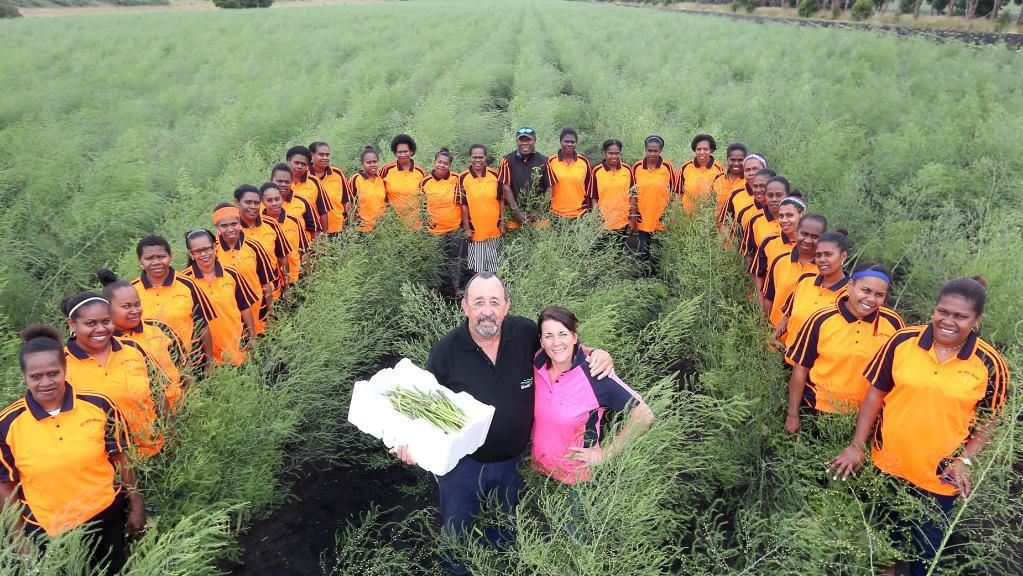 For South Gippsland asparagus farmers in Australia Frank and Donna Bombaci, the Pacific Islander workforce they bring to their region each year has saved their industry.

Before taking on their first three Vanuatu workers in 2011 under the then pilot Seasonal Worker Program, they said their asparagus harvest workforce was becoming more and more unreliable.

“We wanted to get out of the asparagus industry because of the problems with (labour hire) contactors … you’d never know if your staff was going to turn up,” Mrs Bombaci said.

The couple run Deep Creek Organics asparagus farm at Dalmore, near Koo Wee Rup, where about 90 per cent of the nation’s crop is grown.

They found a solution to the staff harvest problems via the program, which allowed approved employers to bring in Pacific Islanders for up to six months to work on farms and parts of the tourism industry.

This year the Bombacis brought out 116 Vanuatu workers to pick asparagus from August to December on their property and those of neighbouring farmers who also had problems finding local labour.

In an industry first, this group included 33 women to work in a packing shed.

“We wanted to prove to the industry that it could be done, and you don’t have to use contactors,” Mr Bombaci said.

Four of these women, all of whom have children and families at home to support, told The Weekly Times they appreciated the experience and many planned to spend their earnings on their children’s education and building a home.

Mr Bombaci said he planned to double the number of women next season.

Team leader of the group, Karl Kalontano, who is in Australia for his ninth season, is a registered nurse in Vanuatu, something he achieved with funding from the Australian Government.

“I can see how the scheme helps (Vanuatu) families, especially those in rural areas, and I keep coming out to Australia not just for myself, but to help others,” he said.

The Bombacis said they are aware there had been allegations of mistreatment of workers by rogue employers in the program, and said to avoid problems required dedication and hard work.

They said the workers required good accommodation, pastoral care, training and help to adjust to Australian conditions and culture, but said it was a rewarding experience.

“Harvesting asparagus is one of the hardest jobs. These workers are worth every cent,” Mrs Bombaci said.

“But it needs to be monitored more … you can’t just bring these workers out and drop them on a farm. They need to be looked after,” Mr Bombaci said.