In Vanuatu, many women have the responsibility of supporting a full family. As is the case all over the world, women are generally undervalued, lower paid, and find it difficult to find work in areas that are traditionally seen as ‘men’s places’.

The Mamas’ Market employs a considerable number of women within the urban areas of Port Vila. Unfortunately, the conditions of the main market have been deteriorating over time. Carol Dover, Gender and Community Participation Specialist, part of the Design, Supervision and Capacity Development team for the Port Vila Urban Development Project, explains how the project is supporting women in the work place.

Nerry Kalotapu is one of many strong, independent Ni-Vanuatu women helping to break down gender barriers in the work place. Readers may recognise Nerry from her role as Amanda on the TV series Love Patrol as well as her theatre performances with Wan Smolbag, where she worked from 2004 through 2014.

After leaving Wan Smolbag, Nerry stayed home to raise her infant son. However, living as a single mother without receiving any child support was difficult. As Nerry plainly states “I knew I needed money, everything is money.” Nerry had seen a woman working with the RMS road crew on the Port Vila Urban Development Project and thought it would be interesting and challenging work. “I had never seen a woman do that work in Vanuatu,” she said. 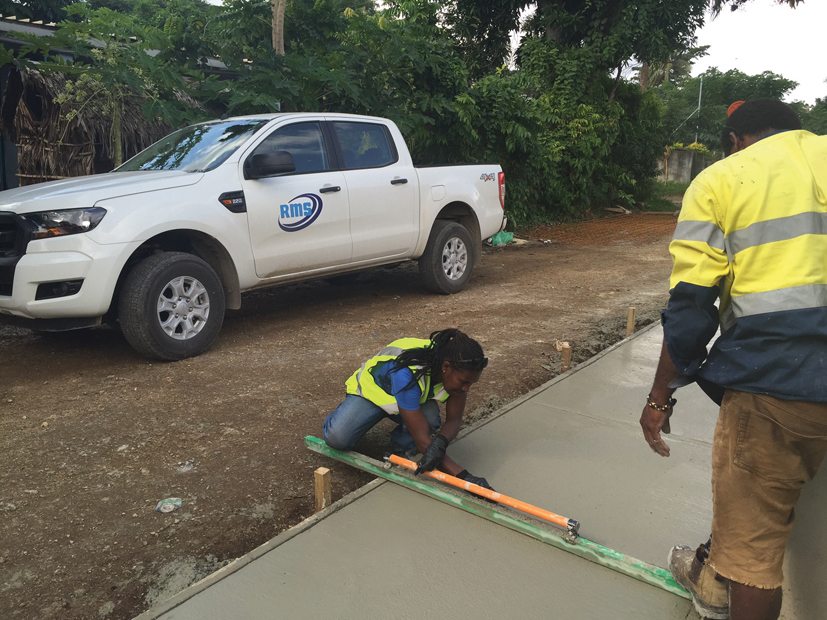 Even though RMS were not actively recruiting at the time, Nerry requested to fill in an application and her confidence won her a position as a Traffic Controller. Nerry reflects that the work is not always easy, the road crew often works nights and drivers are quick to swear at her because “they look down on women”. However, Nerry found the role of Traffic Controller empowering. “Even if it is a police car they have to stop for my sign.” She is now being trained by RMS to learn new skills such as placing concrete and compacting road coronous. Nerry believes there is nothing to stop her and other women from learning new skills. “I tell the other girls you must not be shy to ask to learn new things and you should not be ashamed to apply for work. Women are special and we can do everything and anything.”

In addition to refurbishing roads and drainage systems, the Port Vila Urban Development Project will be refurbishing kitchen sinks and installing additional sinks for the mamas’ restaurants at Port Vila’s main market, as well as building a new sanitation facility at the market. Two women who will directly benefit from the project are Rendo Joseph and Anna Pakoa. Rendo is one of the mamas who bring their garden produce to the market, rent a table at 450 vatu per day, and stay with their produce day and night, sometimes sleeping under their table most of the week. 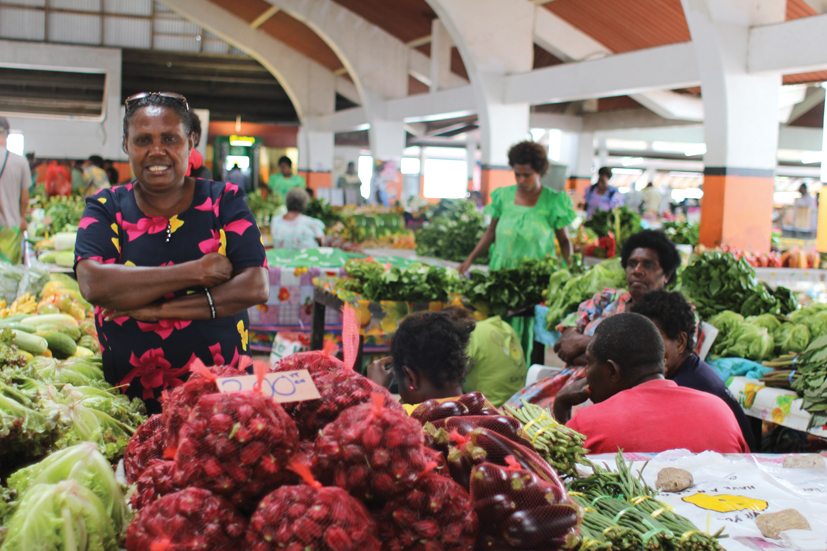 Rendo, a single mother of five, reflects on the many challenges of working at the market to support her family. Since Tropical Cyclone Pam destroyed the seafront craft market, the main market has had to accommodate the Craft Mamas and this has led to overcrowding and tensions between market vendors. The Port Vila Municipal Council manages the market and provides a security guard at night to deal with the drunken men who sometimes pose a threat to safety and security.

“Green” vendors wake at 4:30 a.m. to sweep the market and then queue for the showers and toilets. Leaking taps and inadequate sanitary bins have led to unhygienic conditions. Rendo thinks that it will be good to have access to an increased number of hygienic toilets and showers and welcomes the addition of a laundry tub for washing clothes.

Anna Pakoa has worked for 13 years cooking and selling lunches and dinners at her main market restaurant. During this time she has managed to save enough money to educate her seven children, two of the eldest having graduated year 13 and a third currently studying business accounting at the Vanuatu Institute of Technology. This is a remarkable achievement for a woman who only received two years of primary school education. 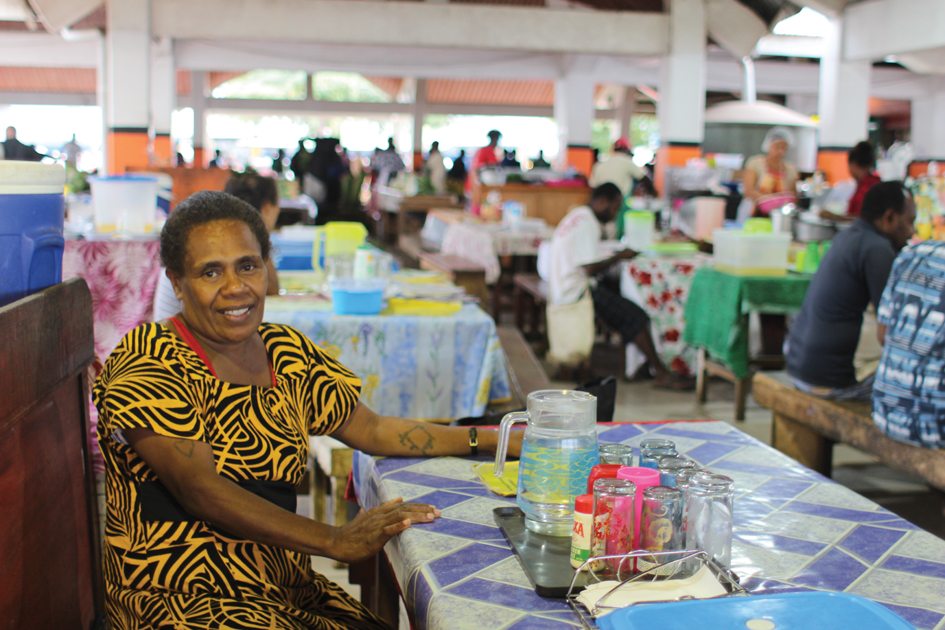 Anna has self-educated and worked hard to build up her small restaurant business. She realises that the market’s restaurant area needs to improve the level of sanitation and hygiene and agrees with many of the restaurants’ mamas that the Municipality should invest in improvements such as new and matching kitchen cupboards and tables. Improved hygiene and a more attractive setting will help to attract more customers, she says.

The Port Vila Urban Development Project will address the market restaurants’ hygiene and sanitation issues by installing new kitchen sinks and refurbishing existing sinks, adding grease traps and building a new sewage treatment system. Once the new sanitation facility is complete, the project will demolish the old toilets and showers along with the old and inadequate septic tanks. The septic tanks are currently located adjacent to the sea wall and contribute to contamination of Port Vila’s harbour. 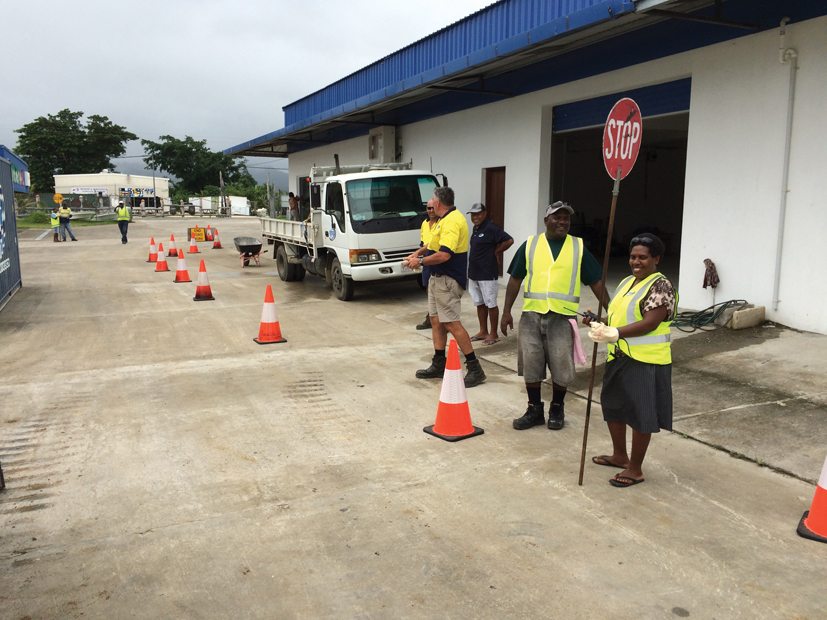 The Port Vila Urban Development Project is a US$32 million infrastructure project funded by the Governments of Australia and Vanuatu and the Asian Development Bank. The project aims to improve 13 km of roads and 7 km of drainage networks, and to improve hygiene and sanitation and reduce water-based hazards in greater Port Vila. The project will construct or refurbish sanitation facilities in four public settings and seven communities. The project is also building a new sewerage treatment plant and supporting the Vanuatu Tourism Infrastructure Project by supervising the reconstruction of George Kalsakau Drive along Port Vila’s seafront district. 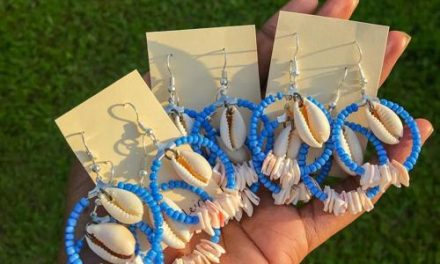 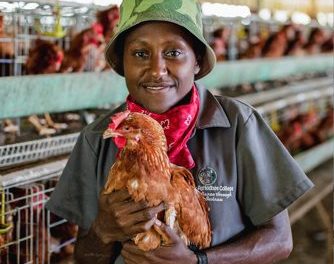 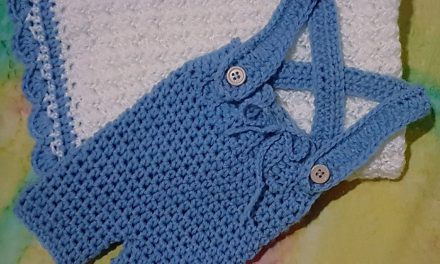 Locally made crochet pieces for sale 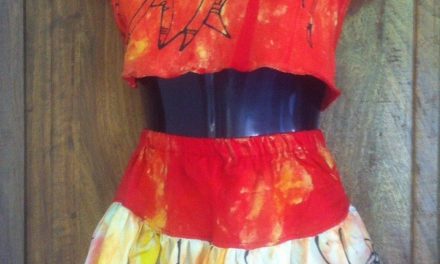