A volunteer nurse from Australia, Helen O’Sullivan, who has just returned from serving at Lamap hospital on Malekula, expressed urgent needs for the South Malekula hospital.

She returned to Port Vila on Monday this week and then travelled back to Australia.

“There is no running water in the hospital that patients can’t use bathrooms for shower or even wash their hands, which creates a great infection risk,” a concerned volunteer nurse O’Sullivan expressed to the Daily Post.

She also alleged that the hospital lacks electricity.

“There is ineffective power or electricity.

“The lights don’t work at night.

“We received an emergency case at night at around 11pm and had to use torches.

“Some women give birth at night by torch light also.

“It is very unsafe,” O’Sullivan who spent two weeks at the Lamap hospital said.

“Women and children are scared to stay at the hospital or admitted into hospital because of lack of security, especially at night,” O’Sullivan said.

She also said that there’s no security at the hospital, especially at night and no gardener because of lack of funds therefore the lawn is very overgrown.

“We received a family of four who were dangerously unwell with fish poisoning and used up all our intravenous fluids and were unable to get access to anymore for one week.

She also alleged that there is no doctor employed at Lamap hospital, while 2 out of 5 nurses working at the hospital had not received a wage for three months while another nurse had not been on leave for two years. READ MORE 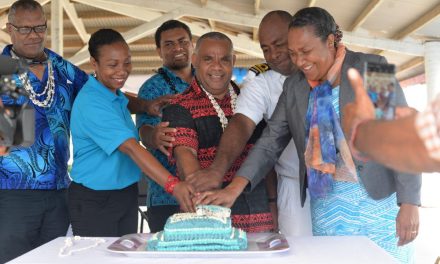