Three boys, all under the age of 13 have died in a tragic fire, which razed their home at Eratap on Friday night.

They were reportedly fast asleep, when flames engulfed the building.

Daily Post was told the three victims are cousins. Their mothers, from Tanna are biological sisters and left the boys under the care of their younger sister that night.

Relatives close to one of the victim’s father said the mother of two of the victims went to visit a relative, who had been medvaced from Tanna to Port Vila, at the Vila Central Hospital (VCH) and the other mother was at work.

They say the younger sister, who was entrusted to look after the children stayed with them, and when they fell asleep; she went to sleep in another house.

They mentioned the cause of the fire is yet to be determined but confirmed the victims used a candle that night.

The father of one of the victims was reportedly drinking kava at Second Lagoon, at the time of the fire.

Sources said that after having his kava, the father was dropped by a transport at the Eratap main road and when he reached home, the flames were still high and the children were trapped inside.

Relatives at the scene said he attempted to batter down the front door with his fists, in attempts to save his trapped family.

They said the door was locked from outside.

However, sources claimed the younger sister shut the door but did not lock the house from outside.

During the fire, no one could approach the building because of the flames.

Emergency services were called to the scene at around 9pm Friday, but the house was already reduced to ashes and all three children never made it out.

The house was totally destroyed, because it was built with local material and caught fire easily.

A group of divers mentioned that they saw the fire at Eratap Point but they were too far to see what was really happening.

The bodies of the victims were later transported to VCH, for examination before burial at Eratap village yesterday.

Police confirmed an investigation has been launched.

“These are utterly heart-breaking circumstances and our thoughts go out to everyone affected by this tragic incident,” said police sources.

“This appears to be a family home and we have been working to inform loved ones of this terrible loss.

“We know the community of Tanna and Eratap will feel the impact of this and we assure you, that we are working with our colleagues to get to the bottom of what happened, although we are currently not treating it as suspicious”.

It is understood the neighbors are being allowed back into their homes.

Tanna chief, Malcolm Raymond has urged people in the rural communities to use chinese solar lights and stop using candles.

He also suggested that the Government should stop the import of candles. 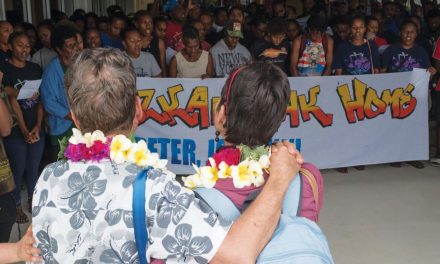