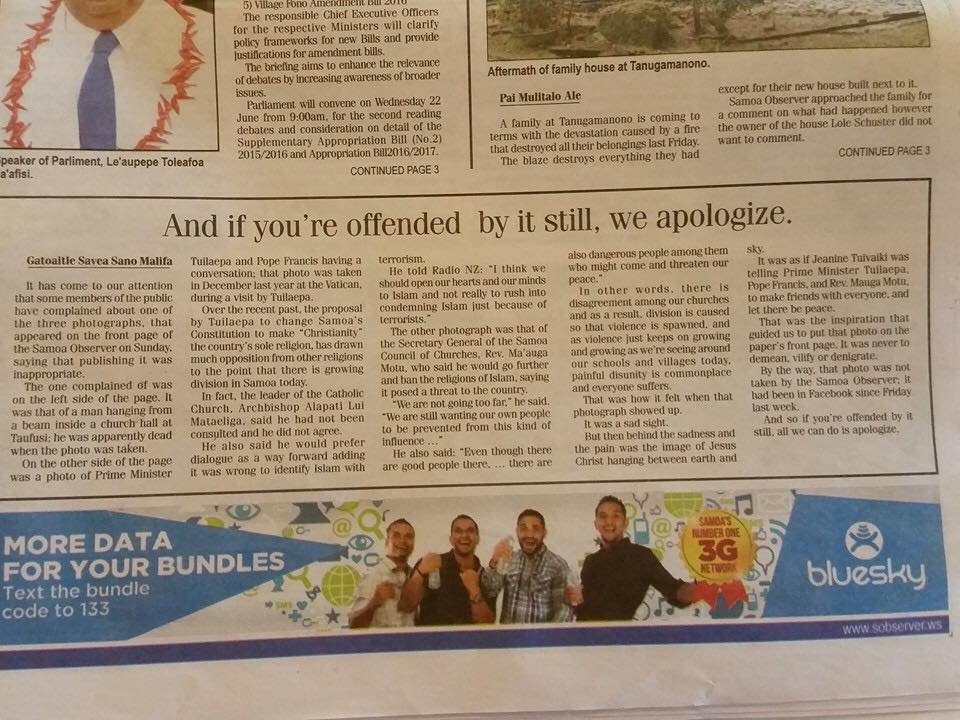 Outrage has erupted in Samoa after a national newspaper published a photograph on its front page of a dead transgender woman.

The woman, who was discovered in a church hall on Friday morning local time, died of a suspected suicide.

A photograph on the front page of today’s Sunday Samoan – a sister paper of the Samoa Observer – depicted how she was found at the scene.

She was named by the paper as Jeanine Tuivaiki, a 20-year-old computer student who was a regular at the Catholic Church of Taufusi.

However, the paper has been slammed for its “insensitive” treatment of the death – not only in publishing the graphic photograph, but also in repeatedly referring to Ms Tuivaiki as a man.

On Facebook many branded the story “disgraceful” and said it lacked respect for the dead.

One user said: “Samoa Observer – you stupid, insensitive a*******. You showed that you don’t care about LGBTQ as the photo you published on the front page and the pronoun you used for her just reinforces the abuse, insensitively [sic] and hate our brothers and sisters who identify as LGBT go through.”

Another said: “Was it necessary to put that picture of [Jeanine] Tuivaki on the front page of the paper?. Yes she is a transgender person, but where is the respect for the dead ?. I am disgusted at the lack of Respect for this human being.”

One blogger said it “disregards the rights of the victim, families and friends”.

“Media ethics classes will study this outrage for years to come as it’s an awful example of how to absolutely not report these kinds of stories,” he said.

A number of people on social media said they would write to complain about the story, while others suggested Ms Tuivaiki’s family should sue the paper.

“Insensitive & disrespectful are understatements. This family should take legal action against SO!”

According to the Sunday Samoan, Ms Tuivaiki was found in the hall of the Catholic Church of Taufusi in the early hours of Friday morning local time.

Members of the church declined to comment to the paper, saying only that the matter had been referred to police.

A friend told the newspaper the circumstances surrounding her death were not yet clear, but she believed that if someone had found Ms Tuivaiki earlier she might have been saved.

The friend described Ms Tuivaiki as “someone who was very committed to the church and especially our youth”.

“We are all shocked about what happened,” the friend said.

“[She] was a loving person, very talented and [she] seemed very happy every day.”

The Sunday Samoan has issued an apology to its readers, which will feature on the front page of tomorrow’s Samoa Observer.

Penned by editor in chief Gatoaitele Savea Sano Malifa, and sent to the Herald, it said the photograph was placed alongside two stories about divisions in Samoa’s religious communities as it appeared to have symbolic meaning. Religious division had caused violence, “painful disunity”, and suffering, he said.

“That was how it felt when that photograph showed up. It was a sad sight.

“But then behind the sadness and the pain was the image of Jesus Christ.

“It was as if Jeanine Tuivaiki was telling Prime Minister Tuilaepa,Pope Francis, and Rev. Mauga Motu, to make friends with everyone, and let there be peace.

“That was the inspiration that guided us to put that photo on the paper’s front page. It was never to demean, vilify or denigrate.”

The photograph had been circulating on Facebook for a week, he said.

Mr Savea Sano Malifa ended by saying: “And so if you’re offended by it still, all we can do is apologise.”